Newtrogic High Zone is the setting for most of Chaotix - with the exception of the first level, Isolated Island, which depicts Knuckles and Espio's approach to the area. The US and Japanese manuals tell completely different stories about the Zone's provenance, but the latter states that it's a resort spot where a fortress was constructed by Dr. Eggman in order to (somehow) expedite his search for the Chaos Rings. It is presumed to be destroyed after the the events of the game.

Functioning as a sort of playable options screen for Chaotix, Newtrogic High Zone's entrance, known as World Entrance in the game's stage select, is where the player starts on loading up a save state. From here a second member of Chaotix can be plucked from the Combi Confiner, and the semi-random level selector determines which of Newtrogic High's five constituent areas are to be played next.

The apparently harmless level select machine ends up functioning as the penultimate boss battle, when Metal Sonic interfaces with a hidden docking mechanism and pits the substance of the level itself against the player! 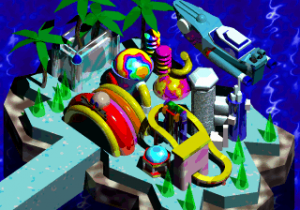 A panoramic view of Newtrogic High Zone, as depicted in one of the prototypes.
Retrieved from "https://info.sonicretro.org/index.php?title=Newtrogic_High_Zone&oldid=260440"
Categories: