Shadow the Hedgehog went through many ideas and changes during the development process. What follows is a collection of items related to the game's development. 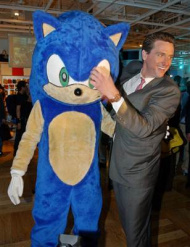 Sonic the Hedgehog and then-mayor of San Francisco Gavin Newson. From the Walk of Game celebration.

After the release of the multi-platform Sonic Heroes, questions arose as to what direction the Sonic the Hedgehog franchise would go next. Would it be a sequel to the Heroes formula? A return to the Adventure style of gameplay? Or would it be something new entirely? Rumors began to circulate when, through official Sega channels, an online poll was put up asking people to vote on which character in the Sonic franchise they'd like to see star in their own game. With choices including the obvious (Miles "Tails" Prower, Knuckles the Echidna) and some from left field (Espio the Chameleon), the winner of the poll would be none other than Shadow the Hedgehog, the "Ultimate Lifeform" that had been introduced in Sonic Adventure 2 and was proven to still be alive (in some form) in Heroes.

Only a few weeks after the results of the poll were revealed, it was announced that the character of Sonic the Hedgehog would be one of the inaugural inductees into the Walk of Game, an attraction in San Francisco that was designed to honor the icons of video gaming, both the characters on screen and the minds behind the scenes. Being on hand at the event, Sega found it the perfect time to unveil the next installment in the Sonic series. The trailer came in two parts: the first being a celebration of all things Sonic over the previous fourteen years, the second footage of the latest title being developed by Sonic Team, introduced with a hail of bullet holes over footage of the previous games. This was the world's first look at Shadow the Hedgehog, named after the character who would be the star.

Sonic Team USA, having renamed themselves Sega Studios USA after the completion of Heroes, more than likely did not begin the development of the game based on the poll, using the results simply to gauge fan reaction when it would be unveiled. Knowing he wanted to do more with the character even while developing Sonic Adventure 2, Takashi Iizuka was ready to tackle the character after wrapping up production of Sonic Heroes. As the previous titles has been aimed at a younger audience, Iizuka wanted to appeal to an older demographic with the game, and attract those who might not otherwise play a Sonic title.[1] Also wanting to capitalize on the story elements of the game, Iizuka wanted focus on the mysterious nature of the character and his origins, providing a platform to answer the many questions fans of the character had been asking over the previous two games he was featured in.[2]

Because of the darker nature of the character, the team took inspiration from such films as Underworld, Constantine, and the Terminator series in building the world of Shadow the Hedgehog.[3] This dark tone gave way for elements to be added to the game such as being able to ride vehicles and the use of weapons, which became one of the main elements of the gameplay to make Shadow the Hedgehog distinct from the standard Sonic franchise. Though shooting elements had been in the two Adventure titles, the team wanted to come up with a new way to challenge themselves, creating a "gun action" game that focused on both speed and shooting at the same time. Seeing Shadow as the only appropriate character to go about this, production was fully underway.[4]

Another element the team was sure to put in the game was the use of branching pathways within the story. Wanting to use it for Sonic Adventure 2 but running out of time, it was made an essential component of the Shadow the Hedgehog experience. Playing with the Hero/Dark motif from Shadow's introduction, the game's tagline ("Hero or villain? You decide.") encapsulated that each playthrough of the game could be a wholly unique experience. Though only playing through six levels at any given time, a total of 22 were available, with 326 different ways a player could successfully complete the game.

Due to the minor controversy surrounding the use of weapons in the title, as well as mild swearing and the use of blood in the human and alien enemies, the game initially received a "T" rating from the ESRB, Sega even asking those at trade shows and events where the game was being demoed to only play if they were 13 and up. As luck would have it, as the game was being produced, the ESRB decided to update their rating system, adding an "E10+" rating between "E" and "T." Wanting to take advantage of this, the Western translation of the game removed some of the swearing that was present, leaving other moments in tact. The blood was also dealt with, removed completely from the G.U.N. soldiers and changed to green for the Black Doom armada. This purposeful censorship on Sega's part allowed the game's rating to be changed to the lower ten-and-up designation, even if such a move contradicted the intention of targeting the game to an older audience.

Echoing the multiple character themes in the previous 3D installments, multiple vocal tracks were composed for the game, specific ones playing depending on the path taken by Shadow. However, there were certain songs that Jun Senoue, the lead music composer of the game, wanted but was unsuccessful in getting. The first of these was a track entitled "Who I Am," written by the band Magna-Fi. Also producing the track "All Hail Shadow" for the game, the former track was forced to be removed due to copyright and licensing issues. "Broken," a song previously released by the band Sins of a Divine Mother, was another track that Jun wanted in the game. Unfortunately, as he was unable to track down the band's lead singer to discuss the licensing of the song, it was forced to be dropped as well. Instead, the song "Chosen One" was used, written and performed by the band A2 (which happened to feature members from Sins of a Divine Mother).[5]

This game was the first to feature a new English voice cast. Shortly before the untimely death of Deem Bristow, Sega saw fit to replace the voice actors used in the Adventure series with the 4Kids dub cast of the cartoon Sonic X in an effort to bring consistency to the franchise. These actors would remain in their roles until Sonic Free Riders in 2010.

The risks that were taken during the making of the game proved ineffectual, as the released product was thoroughly trashed by critics. Although it defied those critics by selling reasonably well, in the end Sega judged it not successful enough to warrant a full-fledged companion franchise. The game has retrospectively been cited as a "jump the shark" moment for the Sonic series by both fans and industry professionals; a sentiment which would later be exacerbated by a 2006 game intended to celebrate Sonic's 15th anniversary...

The following screenshots were released to the public immediately after the reveal of Shadow the Hedgehog at the Walk of Game event.