For the Wii version of the stage, see Starlight Carnival (Wii).

Starlight Carnival is the third Area in the Nintendo DS version of Sonic Colours. As with every other Area in the game, Starlight Carnival features two full Acts, three missions and a boss fight. It becomes available to play alongside Sweet Mountain after clearing Tropical Resort, and either can be completed first.

This Area introduces the Orange Wisp, allowing Sonic to use Orange Rocket.

After Globotron is defeated in Tropical Resort, both Sweet Mountain and Starlight Carnival open up for Sonic, Tails, and Yacker. On traveling to the latter, they run into their first Orange Wisp, which lets Sonic use the power of rocketry. Further exploration into the Mission stages brings the friends across Rouge the Bat. Allegedly, the thief is scoping out the park for an undisclosed client. Knuckles the Echidna is in the area as well, about to bash up Orbot and Cubot. Sonic's arrival distracts the Guardian enough for the robots to escape, and it becomes quite evident that Knuckles' presence here is the result of him falling for another trick - later to be revealed as Rouge forging a letter to him from "Eggman"!

If this Area is played after Starlight Carnival, Sonic will reach Dr. Eggman, who whips out a mind-control cannon and hypnotizes Tails. As is often the case with Eggman's machines, though, it doesn't quite work as intended, running out of juice after mere seconds. Not to let a mishap like that stop him from ruining everyone else's day, the fat man sets his boss robot, Frigate Orcan, on the heroes. 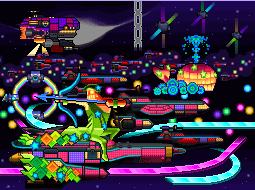 The map screen for Starlight Carnival.

A drifting fleet of brightly-lit star cruisers modelled after astrological figures, this flashy orbital armada serves as one of the attractions in Dr. Eggman's Amazing Interstellar Amusement Park. The paths between the ships are full of brightly-colored neon roads, signs, and statues, as well as paths that materialize as Sonic runs along them.

As a level made up of starships separated by yawning voids of starry black, the area has lots of wide open spaces to Rocket Wisp and glide through, as well as long networks of brightly coloured grindrails.

A short optional tutorial teaches the player how to use the Orange Rocket Color Power.

Starlight Carnival Act 1 takes place inside of one of Eggman's starships and introduces the Orange Wisp. Using the boost, the player can trigger switches that activate illuminated rails to grind on. Entering the cannons in this Act and tapping

repeatedly will fire Sonic from it. Several cannons are also automatic, shooting Sonic from one cannon to the other, similar to those of the Oil Ocean Zone in Sonic the Hedgehog 2. The Cyan Wisp, which isn't unlocked until Aquarium Park, also appears in this Act.

Starlight Carnival Act 2 takes place outside of the ships and is the first main Act in the game to feature bottomless pits. The illuminated rails and cannons return from Act 1 return, as well as neon archers that will fire arrows that Sonic can ride on and, at the end of the Act, a neon whale that travels slowly through a series of enemies, Rings, and platforms.

Collect 200 Rings before time runs out. This mission takes place in Act 1, but enemies and obstacles are now more plentiful.

Defeat 15 enemies in 50 seconds. This mission takes place in Act 2.

Rescue 20 Wisps. To clear Mission 3, Sonic must collect 20 White Wisps within 50 seconds by defeating badniks or destroying Wisp capsules. This mission takes place in a new area of Act 1 where the player must progress by using the Orange Rocket color power and line it up with the Egg Flappers above to rescue the Wisps.