Back to: Sonic Gems Collection.

Skip to the Games menu

while booting the collection. This will skip the Sega logo and title screen and load the Games menu directly.

It is possible to restore the Japanese soundtrack to Sonic the Hedgehog CD in the EU PlayStation 2 version of Sonic Gems Collection by editing the ISO in a hex editor[1]. Just open the ISO, search for "BGM_US" and scroll down to line 1353439A and replace the "US" with "JP". After being saved, the game will run the Japanese soundtrack. 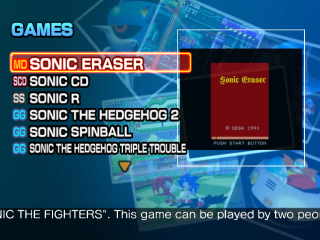 By using an Action Replay on the GameCube version of Sonic Gems Collection, it is possible to show the title graphics and name of games that were removed from the final version of the compilation[2], though the game data itself is missing. Two of these cut games, Monster World IV and Sonic Eraser, use an orange-red "MD" icon, likely to denote that they were Japanese-only release games. To display these games in place of Sonic the Fighters, use the code 021CCD5B 0000XXXX, where XXXX is substituted for the following:

The following strings are found in text_e.utx and are encoded in Shift-JIS.

Unused English descriptions for the four games that were removed from Western releases:

Unused strings referring to the Xbox. Since Sonic Gems Collection was never released for the Xbox, these are never used.

Only Bare Knuckle 2 is unknown.