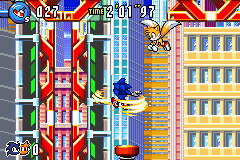 Sonic Advance 2 is the first game to feature Trick Actions, and are usable by all characters except Super Sonic. Whenever a character is launched from a spring, ramp or other object, the player can press the

button along with one of four cardinal directions to perform a Trick Action that varies depending on the direction. These propel the character in the given direction, and may double as an attack. Usually, these are for accessing additional routes, but from Sky Canyon onwards it becomes necessary for the player to master them in order to progress.

Trick Actions also appear in Sonic Advance 3 and are usable by all characters except Knuckles and Super Sonic, but only with certain character combos, specifically the duo consisting of Sonic and Tails, and the duo consisting of Amy and Cream. The Trick Actions work exactly like in Sonic Advance 2 and include all the maneuvers for the characters except for the Quick Reverse. They are activated in the same way by pressing

and the D-Pad in certain directions when being launched by a gimmick, and just pressing

triggers the Long Wind Jump maneuver. Due to being mapped to the same button, Tag Actions cannot be charged while using Trick Actions.

In Sonic Rush and Sonic Rush Adventure, the maneuver is referred to as both Trick Actions and TricksMedia:SonicRush DS US manual.pdf[10], and can be performed by both Sonic and Blaze. When launching off a Spring or a Jump Panel, the player can perform the Big Air and Long Wind Jump tricks like those in the Sonic Advance series by pressing

respectively, but they can also perform additional tricks to fill the Tension Gauge:

In Sonic Rush Adventure, the Basic/Advanced Tricks are renamed to Air TricksMedia:SonicRushAdventure DS US manual.pdf[11]. Performing tricks in regular stages is mostly the same as in Sonic Rush, only this time the player can earn the "Trick Bonus" for chaining multiple Trick Actions and get extra energy for the Tension Gauge.Media:SonicRushAdventure DS US manual.pdf[11] A counter is displayed in the corner of the screen when peforming Trick Actions, and can be raised by using more than one gimmick in a single flight.

When using the Wave Cyclone in Sea Stages, the player can perform Trick Actions when riding over ramps by tracing the Trick Marker on the Nintendo DS' Touch Screen to fill up the Boost Gauge.

Throughout the Sonic Riders series, all playable characters can perform Trick Actions when launching off ramps or Trick Zones. For longer air time, the player must jump as soon as they launch. Once in the air, the player can then use the movement controls to perform a variety of tricks. After landing, they will be given a Rank based on how many tricks the player performed, awarding more Air (in the first game and Sonic Free Riders) or Gravity Points (in Sonic Riders: Zero Gravity). If the player doesn't land straight after performing tricks, they will get an automatic C-Rank.

In the Wii version of Sonic Colours, Trick Actions are performed after the player launches off of a Trick Ramp, and simply require the player to press

up to five times. With each press, the announcer will shout "Good!", "Great!", "Awesome!", "Outstanding!" and "Amazing!" in that order. If the player is playing as Super Sonic, the player will only perform one trick with the announcer skipping straight to "Amazing!".

In Sonic Generations, Trick Actions are referred to as Freestyle TricksMedia:SonicGenerations 360 UK manual.pdf[12] or just tricks, and can only be used by Modern Sonic.

Whenever Sonic reaches a Trick Jump Panel or a Rainbow Ring, the player is prompted to perform tricks using the Left Stick, and performing strings of tricks to fill the Boost Gauge, then press

(PS3) to end with a Finish Combo that grants extra Boost energy. The longer the combo, the more energy the Finish Combo will grant. However, if the player presses the same direction twice in a row, they will get diminishing returns. Performing tricks will also charge the Boost Gauge beyond its maximum capacity.