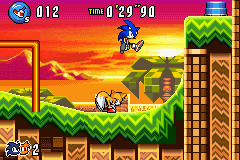 Sonic and Tails performing a Tag Action in Sonic Advance 3.

The first game to feature Tag Actions is Sonic Advance 3. In this game, a player can press and hold the

button to bring their partner to them. Once the Tag Action is ready, the player's character will be carrying his/her partner in ball form in his/her arms. At that point, once

Tag Action preparation can be interrupted by a number of factors, such as taking damage, running up a wall or a loop, grinding rails, or interacting with certain objects such as pulleys, so it is up to the player's judgement on when to charge a Tag Action. Due to being mapped to the same button, the player cannot charge a Tag Action while performing a Trick Action.

Tag Actions return in Sonic the Hedgehog 4: Episode II for Sonic and Tails to use throughout the game, both sharing the same actions. In this game, Tag Actions are immediately initiated by simply pressing

, and once pressed the action is performed immediately. There are three kinds of Tag Actions that can be used depending on where the button is pressed:

Tag Actions are not immediately available to the player(s) when starting a new game; they must each be unlocked by using them at specific points throughout Sylvania Castle Zone. Additionally, using a Tag Action will force Super Sonic to revert to normal, though he may transform again if the player(s) has enough Rings.