Sonic 3's level select is notoriously hard to activate, and perhaps for good reason - it's listing Zones that aren't in the cartridge.

The ambitious scope of Sonic the Hedgehog 3 meant that from an early stage, it was decided that the adventure would be split into two halves. As a result, 1994 marked the release of two mainline Sonic the Hedgehog platform games - Sonic 3 in February, and Sonic & Knuckles in October.

Unlike Sonic the Hedgehog 2, which spent the best part of ten months in the public spotlight across 1992, news of Sonic the Hedgehog 3 did not break until after 1993's Christmas Sonic schedule; the combined efforts of Sonic Spinball, Sonic CD and Sonic Chaos. Having only surfaced in December 1993 and released within three months, questions could be asked about whether the game was quite as big as it claimed to be at launch. Sonic 3 has bigger levels, but with only six Zones, there was suggestion early on that something was missing.

In February 1994, Sonic the Hedgehog 3 was not technically finished, but a tie-in promotion with McDonalds saw the game released anyway. There seemed to be an acknowledgement in the release schedule - breaking from a tradition of near-simultaneous worldwide Sonic launches, Japan wasn't set to receive Sonic 3 until May, and rumours began to surface that their version would be bigger. When news got out about Sonic 3's level select, it was clear more content had been planned; Flying Battery Zone, Mushroom Valley Zone and Sandopolis Zone are all accounted for, but cannot be accessed normally. Likewise levels in Sonic 3 tease routes that Sonic and Tails can't access, and the much hyped Knuckles the Echidna is defeated by a wobbly girder - perhaps not a fitting send-off.

Behind the scenes, the Sonic 3 team were indeed working on a bigger game - Sonic the Hedgehog 3 Limited Edition, also known as Sonic 3+, a rumoured 24-megabit cartridge that would have been the definitive version of the adventure. But while development continued shortly after the split, the focus soon became on releasing a "part 2" that could combine itself with "part 1". 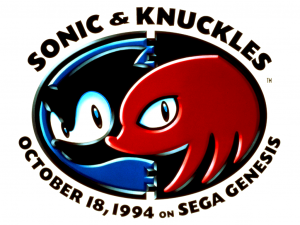 After Sega Gamer's Day 1994, this was all that was known about the Sonic & Knuckles project.

Sega did not confirm the existence of Sonic & Knuckles until Sega Gamer's Day 1994 in June, where they showed just the logo and a October 18th release date.

The first official showing of Sonic & Knuckles and its "Lock-On Technology" would not occur until Monday October 17th, when Sega teamed up with broadcaster MTV to show the game on a special television show, Rock the Rock. Taking place on the prison island of Alcatraz ("the rock"), it also featured 50 contenstants competing for a $25,000 grand prize[1]. This competition occured nine days before broadcast, on October 8th[2] and was presented by Bill Bellamy and Daisy Fuentes[3].

Prior to this, 40 competitions occured across worldwide markets (or at least, Canada, Japan, Brazil and 16 competitions held at Hard Rock Cafes across America[2]), where players would compete on Sonic & Knuckles to see who could collect the most Rings[2].

Winners of this competition would be handcuffed, dressed in prison uniforms and put on a plane to San Francisco to participate in a high-speed chase[1], being escorted by Brink's trucks and limousines along the way[2]. Five additional winners came from randomly selected calls from a special 800 telephone number[1]. All were escorted to Pier 41 in San Francisco and ferried out to a section of Alcatraz not normally available to the public[2]. All would again compete on Mushroom Hill Zone for Rings at around 1PM in the afternoon[2].

The final saw Mark Guinane of Boston (274 Rings) and Chris Tang of San Francisco (248 Rings) compete as Knuckles in Launch Base Zone, where the 18-year old Tang collected 30 more Rings than his rival to take home the money and the title of "World's Most Hard-Core Gamer"[2]. Both were also set to receive every Sega product released over the course of the next year[3].

This event was part of Sega of America's $45 million marketing budget set aside for Sonic & Knuckles[3].