The following are instruction manuals for Sonic & Knuckles. 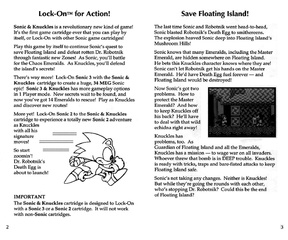 Now Sonic's got two problems. How to protect the Master Emerald? And how to keep Knuckles off his back? He'll have to deal with that wild echidna right away!

Knuckles has problems, too. As Guardian of Floating Island and all the emeralds, Knuckles has a mission -- to wage war on all invaders. Whoever threw that bomb is in DEEP trouble. Knuckles is ready with tricks, traps and bare-fisted attacks to keep Floating Island safe.

Sonic's not taking any changes. Neither is Knuckles! But while they're going the rounds with each other, who's stopping Dr. Robotnik? Could this be the end of Floating Island? 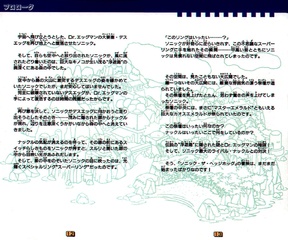 Sonic crashed the Death Egg, Dr. Eggman's great fortress, which was about to take off into space, back to the ground.

Sonic is thrown into the air, and the wind carries him to a forest deep inside the "floating island" where giant mushrooms are growing.

From the air, Sonic could see the Death Egg crashing into the island's volcano, but he was not yet relieved.
It was only a matter of time before Dr. Eggman revived the Death Egg, which had not been completely destroyed.

Just as Sonic was about to run towards the Death Egg... Knuckle appeared from a door hidden in the bushes and disappeared into the forest, cautiously watching the area.

As he waited for Knuckle's presence to disappear, Sonic pressed a switch in front of the door, and a dazzling light flooded out from inside the door, which opened quickly.
What Sonic saw when he looked into the door was a shining special ring called the "Super Ring."

"What could this ring be...?"
Sonic's curiosity got the better of him, and he touched the mysterious super ring, and at that moment, with a high-pitched sound, Sonic was transported to an unfamiliar space.

The space was a large hall that he had never seen before.
There was not a speck of dust in the hall, but there was an altar with a solemn atmosphere.
As soon as Sonic looked up at the altar, he couldn't help but exclaim in surprise.
In the center of the altar was a huge Chaos Emerald, essentially the "Master Emerald."

What on earth is this altar?
What exactly is Knuckle doing here?

The mystery behind the legendary floating island and Dr. Eggman's conspiracy!
And the showdown with Sonic's biggest rival, Knuckle!

That's right, the adventures of Sonic the Hedgehog have only just begun!

A flying echidna. His nickname is Knuckle.

He is an evil genius scientist who will appear again this time. He's the best in the world at screwing up and being spiteful!

A fox with two tails who helps Sonic. He doesn't show up much this time?