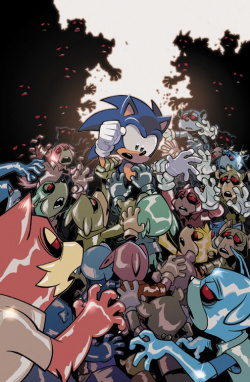 Cover art for issue #20, depicting Sonic being swarmed by Zombots. Drawn by Jack Lawrence and coloured by Matt Herms.

Zombot is the term used to refer to people and animals that have been completely transmutated by the Metal Virus, transforming them into zombie-like robots in a similar manner to roboticization in other Sonic media. They have appeared in the Sonic the Hedgehog comic series by IDW Publishing.

The term was coined by Sonic the Hedgehog based on their nature. They had overrun Sonic's world, but when the Metal Virus was destroyed by Super Sonic and Super Silver in issue #29, all of the Zombots returned to normal.

According to writer Ian Flynn, the design for the Zombots was inspired by the hidden metallic character textures in Sonic Heroes' 2P Play mode[1]. When designing Shadow's Zombot appearance, artist Bracardi Curry took inspiration from the playable Shadow Androids in Shadow the Hedgehog's multiplayer mode[2][3]. A Zombot Tumble restoring himself after Sonic's assault, as depicted in issue #15. Drawn by Jack Lawrence.

When fauna is completely transmutated by the Metal Virus, their genetic coding is completely rewritten, transforming them on a molecular level into bodies made up entirely of a metallic compound. This causes them to take on a metallic sheen while retaining shades of their original colours. Their eyes become dark red with small, bright red pupils, however the general shape of the eyes remain the same as their organic selves. Zombots may also develop additional features on their bodies from their transmutation, such as sharp claws, spikes, fangs and more angular body markings.

Physically, Zombots are much stronger and resilient compared to their original selves. If a Zombot takes damage, it can instantly reconstitute and restore its body to its original shape by manipulating its own composition, making them virtually unstoppable. They retain some, if not all, of the original beings' abilities, though are unable to use more specialised techniques due to their simpleminded nature. For example, after becoming a Zombot, Shadow had forgotten how to use his rocket skates to accelerate himself and his fighting style became more sloppy, though was still faster than the average Zombot. Zombots capable of flight, such as Charmy, a Flicky or a Chao, will still be able to fly. Zombots cannot become ill nor do they need to eat, due to their robotic nature.

Zombots are silent and devoid of any personality they originally had, exhibiting no emotional reaction to the environment around them nor responding to any verbal communication from others, giving them the description of "soulless". They also lack any sort of free will - initially, they would instinctively follow Dr. Eggman's orders, but supposedly due to mutations in the Metal Virus' coding from constant exposure, they gradually became more disobedient and unresponsive to his commands. Being robotic in nature, they can be controlled by the Deadly Six using their electromagnetic powers, though their excessively large numbers required the use of the Chaos Emeralds to allow the Zeti to control thousands at a time.

Zombots can spread the Metal Virus to any living tissue by simply touching it, be it flora or fauna. If idle Zombots are within proximity of any uninfected living organisms, then they will show aggressive tendencies towards them until they are completely infected. If their foe is inorganic, such as a robot, they will continue to attack until said foe is destroyed, as evidenced when they attacked E-123 Omega and Gemerl. However, they seem to be docile towards their own kind, and will behave like they are in a mindless daze if there are no uninfected beings in the vicinity.

In about two hundred years time, the Zombots would eventually disintegrate, as Eggman's research reveals that as the Metal Virus mutates, it becomes unsustainable. Any infected heterotrophic eukaryote cells will eventually suffer a form of apoptosis; autotrophic cells will endure slightly longer, but not by much.

The following is a list of known characters who have been turned into Zombots throughout the Metal Virus saga, in chronological order: