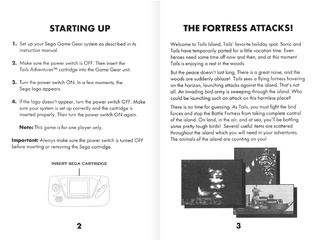 Welcome to Tails Island, Tails's favorite holiday spot. Sonic and Tails have temporarily parted for a little vacation time. Even heroes need some time off now and then, and at this moment Tails is enjoying a rest in the woods. 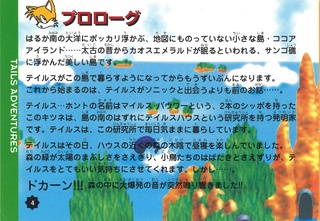 Cocoa Island, a small island that doesn't even appear on maps, floating in the far southern ocean... It is a beautiful island floating on a coral reef, where Chaos Emeralds are said to lie since time immemorial.

It's been a long time since Tails came to live on this island. What follows is the story of Tails before he met Sonic...

Tails, whose real name is Miles Prower, is a two-tailed fox who is an inventor with a laboratory called Tails House on the southern tip of the island. Tails lives in this laboratory every day as he pleases.

That day, Tails was enjoying a nap in the shade of a forest tree near the house. The greenery of the forest blocked out the glare of the sun, and the fluttering and chirping of the birds made Tails feel very good. But then...
Ka-boom! A huge explosion suddenly rang out in the forest!

"Whoa, what the?! What's going on?!" Tails, with a sleepy look on his face, is in a panic.
"Tails! Tails! We're in trouble!" The small bird Flicky shouted to Tails.
"Tails! The Battle Kukku army finally came to this island as well!"
"Battle what now?!" Tails had no clue what was going on.
"Battle Kukku! It's the imperial army of the dictator Great Battle Kukku!"
"Grate Batl Cuckoo? Impryal armie???"
"Great Battle Kukku is looking for the Chaos Emeralds for world domination!"
"What'd you say?!" Stunned by the suddenness of the event, Tails's eyes catch sight of a giant mecha that is tearing down the trees in the forest and spitting out flames.

That's right. The emperor of Battle Kukku, Great Battle Kukku the Fifteenth, who is plotting world domination, has turned his attention to the hidden energy of the Chaos Emeralds and has sent a massive mining army to Cocoa Island.

The forest, the mountains, and the entire island are all burning up. Cocoa Island is in huge trouble!

Tails is the only one on the island who can stand up to the Battle Kukku army in this crisis.

Can Tails muster up the courage to defeat Great Battle Kukku's terrible ambitions?

Will he be able to save Cocoa Island?!

Tails is about to embark on a great adventure unlike anything he has ever experienced before, and for the very first time in his life!

He's an energetic fox who can fly with his two tails. He loves to invent machines, and even has a laboratory on the southern edge of Cocoa Island. The story of this adventure takes place long before Tails meets Sonic.

A versatile submarine with a top speed of 100 knots, it is powered by a chaos nuclear reactor invented by Tails. It can travel underground with its prized drill, and will soon be equipped with rocket components for flight functions.