. They must avoid touching enemies, as such will both damage them and wrestle the Glider from their grasp, but also don't touch the ceiling, which will also cause them to lose the Glider. Machine Labyrinth's characteristic steam jets will also make the player lose contact with the Glider as they're blown away. Sometimes, arrows in the background will tell the player when it's appropriate to increase height. They can press

Kaizoku Gliders patrol the slopes of Blizzard Peaks utilizing normal Hang Gliders. They usually appear as the player speeding down a hill or launching off a Spring, so it's easy to put vertical distance between them and themselves. 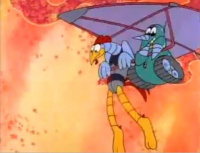