Nayr T'nargh has been a member of the Sonic community from 1998 - PRESENT.

Her last claim to fame was the first example of placing Knuckles the Echidna in Sonic 2 Beta in the form of a heavily modified savestate that played off of putting Knuckles in Wood Zone's slot on Knuckles in Sonic 2 and then porting incomplete collision along with art over from a Sonic 2 (Simon Wai prototype) savestate into the Knuckles in Sonic 2 savestate. Nayr also created an incomplete hack, entitled Sonic the Hedgehog: Overlooked, that ported the 2p levels from Sonic 3 to playable 1p levels in Sonic 2. This project has been on a hiatus indefinitely. 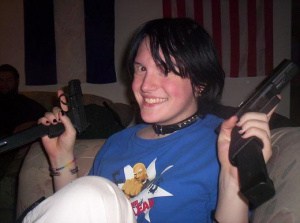 Sonic Chaotix has impersonated Nayr on several occasions using some of her own personal information and stealing many of her aliases to use as her own. Sonic Chaotix enjoys feeling like she's part of something and has used Samantha, TrinityCG, Sarial, Kagura and Ayla as her own names and has even fabricated lies about such users as Tweaker and Aurochs. It is unclear when or if this trend will stop and has caused Nayr considerable grief as a victim of mistaken identity. However, Sonic Chaotix (now Danielle) has now stopped with the Nayr impersonation and promises never to impersonate Nayr again.

If you're conspicuously missing from my love list, let me know!