<forumuser name="Scarred Sun" type="game" /> Scarred Sun (aliases: ScarredSun, QJanebo) is the webmaster of Sonic Retro—the general go-to person for questions, comments and such—and an administrator at The Sonic 2 Beta Page. She was formerly an administrator at Sonic Classic and sysop of SHIT from 2004 to 2006. A member of the Sonic community since January 2001, SS is also involved (or just reads a lot nowadays, due to time constraints) in other Sonic Communities, including Sonic CulT, The Sonic Stadium and the LiveJournal community sonicstuff (though that mostly involves laughing at bad posts.) When not online, she is a technician and motorscooter enthusiast.

Scarred Sun hangs out a lot at the Sonic Retro IRC channel and is the owner of BadnikNET. It's pretty much the best channel in the history of ever, and if you're reading this, then get on irc, you loser. This is highly preferred as the method of contact for SS, as if she's not there, there's usually other folks who will know the answer. If you do need to speak directly to SS, please send a query to ScarredSun/QJanebo, as logs are now too long to read through between times of availability.

When attempting to run for president of Sonic Retro (a moot point? perhaps), Scarred Sun countered saxman's proposal of making cookies for the website by making her own batch of cookies. saxman used his bully pulpit of YouTube in response, calling SS' cookies "sissy-ass." But we all know who really won the cookie war. 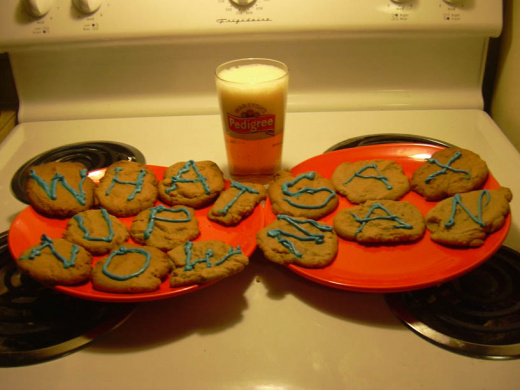