Not to be confused with the similarily named Sonic the Hedgehog Extreme.

Sonic X-treme is an unreleased Sonic the Hedgehog game, developed by Sega Technical Institute and set to be published by Sega of America during the mid-1990s.

X-treme is perhaps the most infamous Sonic game to be cancelled, and personifies much of the problems related to Sega's corporate structure for much of the decade. Following a showing at E3 1996, X-treme was aggressively pushed by Sega of America in an attempt to boost flagging Sega Saturn sales during the Christmas 1996 season. However, after a troubled development timeline, the project was shelved, and a Saturn port of Sonic 3D: Flickies' Island was released in its place.

This page covers the iteration of Sonic X-treme that was announced and demonstrated to the public for the Sega Saturn, however several pitches and re-writes for this Sonic game occurred internally between 1993 and 1997. For those, see Sonic-16, Untitled STI Sonic game, Sonic Mars, Sonic X-treme (Point Of View) and Sonic X-treme (Project Condor).

The storyline for Sonic X-treme was one never set in stone, with quite a few ideas thrown about during the development process. The best known of these (which were mentioned in such magazine features as the Red Shoe Diaries) explains that Sonic the Hedgehog, having received a "bluestreak" distress signal, runs over to the home of Professor Gazebo Boobowski and his daughter, Tiara. The two are the guardians of the Rings of Order, and also know the ancient art of ring smithing. Dr. Eggman, having learned of the rings, has set about to claim them himself, prompting the professor to ask Sonic to retrieve the mystical rings before the evil doctor. When explaining the evolution of the storyline years later, Chris Senn stated that the "Rings of Order" story was hastily thrown together for the specific purpose of the Red Shoe Diaries feature in Game Players, the "final" story having yet to be solidified.

No less than seven other storylines were created over the project's lifespan, the final one authored by Hirokazu Yasuhara and Richard Wheeler. In this version, Dr. Eggman returns with a Death Egg that is larger than planet Earth, its gravity causing other planets to fall into an orbit with the space station. Miles "Tails" Prower teleports Sonic to the Death Egg in the hopes of stopping Eggman's latest scheme, but the beam is intercepted by one of the planets now in orbit. Finding himself on a strange world, Sonic also discovers that the badniks Eggman are using are powered by an alien species called "Mips," the natives to the planets that have become a part of the Death Egg's defenses.

Earlier storylines also briefly considered using the cast of the Saturday morning series Sonic the Hedgehog, though those iterations of Sonic X-treme never went beyond the conceptual phase. 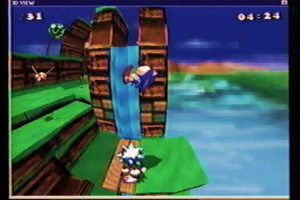 An example of the "fish-eye" lens, one of the unique features in the game. 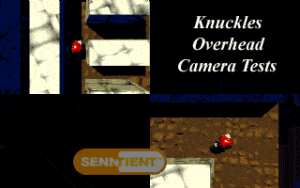 One of the proposed alternate playstyles that was ultimately discarded.

Nearly from the get-go, the intent of Sonic X-treme was to place Sonic the Hedgehog in a completely 3D environment, building upon the ideas of exploration and the "go-anywhere-or-run-through" concept. The levels were constructed in an almost tube-like fashion, the camera pointing ahead to encourage the player to run forward towards their ultimate destination. Because 3D was still new and X-treme was experimenting with how to properly have Sonic in a 3D world, the camera was given a "fish-eye" lens, in an effort to let the player see more of their surroundings within a given zone. Taking a cue from the special stages in Chaotix, Sonic was also supposed to have the ability to run up walls and walk on ceilings, giving what might have seemed like a linear level added areas to explore.

Originally, Chris Senn wanted to use a number of playable characters, including Miles "Tails" Prower, Knuckles the Echidna, and newcomer Tiara Boobowski, giving each their own style of gameplay and camera perspective. Sonic's was meant to be a 3/4 view, Tails was to have the camera positioned behind him, Knuckles would have had a top-down view, and Tiara's gameplay would have been viewed from the side. Though Chris Senn, the lead designer through most of Sonic X-treme's life, was excited at the prospect of multiple characters and styles, the game's lead programmer, Ofer Alon, convinced Chris to keep things simple and focus on the core Sonic gameplay, and to only add more characters if time allowed.

Christina Coffin, the lead developer of the boss stages, also briefly toyed with the idea of Amy Rose being a playable character, modifying the Sonic sprite set the team was using to look like the pink hedgehog. However, aside from the sprites being made, nothing else was done with the concept.

The game was also meant to introduce a variety of new moves into Sonic's arsenal. Among them were the "Power Ball" (an attack to strike down on enemies below), "Super Bounce" (a jump with added height but less control), "Ring Shield" (a shield one could create at the cost of a number of rings collected), and the "Sonic Boom" (an attack in conjunction with the Ring Shield to attack all enemies on screen). There was also meant to be a ring attack, where Sonic could throw the rings he had collected at enemies, an idea that was introduced early on in the Sonic X-treme development cycle.

With the release of Sonic & Knuckles, Sega was more than aware of the potential contained within the Sonic franchise. Not wanting to lose the momentum created by the string of hits in the early 90's, Sega wanted to create the next "big" Sonic game, along with a slew of other titles to help support it. While games like Knuckles Chaotix, Sonic 3D: Flickies' Island, and even G Sonic were being done in other areas of Sega, Sega Technical Institute received the big assignment - to create the true successor to Sonic & Knuckles.

With such a daunting task ahead of them, and with the Japanese side of STI returning to their home country, the American team behind such games as Sonic Spinball, The Ooze, and Comix Zone dove head first into a project that would take numerous twists and turns before its cancellation.

With the cancellation of Sonic X-treme, the Sega Saturn would not see a core Sonic the Hedgehog title released on the system. Though Sonic Team, fresh from their work on NiGHTS into Dreams, did briefly work on a Sonic title for the system, they realized it would be futile to continue further, seeing as the system's short lifespan was already visible. Taking what they had, they quickly slapped together the Sonic World area in Sonic Jam, applying what they learned from this experiment into the production of Sonic Adventure, which would ultimately be released on the Sega Dreamcast.

Sega of America, having never officially canceled Sonic X-treme in the public's eye, at one point teased the idea of certain concepts from X-treme (such as Sonic's proposed arsenal of new moves) being carried over to Adventure, but in reality it was all spin to try and rebuild brand loyalty in US, who had felt burned at the lack of a new Sonic platformer for the Saturn.

X-treme stands as one of several examples of the fraught relations between Sega of Japan and Sega of America, others being the Sega 32X console itself, as well as problems concerning the Saturn and Dreamcast. 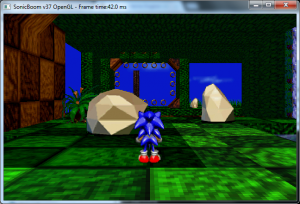 In 2014, ASSEMbler Games member Jollyroger acquired a source code archive of Point of View's work on Sonic X-treme. This archive contains the source for builds v37 and v40 of Ofer Alon's engine and level editor titled "SonicBoom", along with level data and a never before seen engine programmed from scratch by Point of View on Sega Saturn. The PC version of the engine requires an nVidia Diamond Edge 3D NV1 video card, NV1 SDK and a Windows 95 system to work.

The v37 engine has been recompiled in the latest version of Visual Studio and the NV1 renderer code was converted to render in OpenGL instead. It was released for first time on February 23, 2015 as a single level demo. The level featured in this release was the same version of Jade Gully featured in the E3 1996 trailer.

Later on at the same year, more versions of the engine were released; v40 on PC/Saturn featuring the famed "fish-eye" 360-degree view, an updated version of v37 which included over 150 incomplete test levels and allowed running them manually with ease, and a port of Point Of View's engine to run on regular Sega Saturn hardware because the original code would only run on Saturn development hardware. Jollyroger expects other updates which go beyond the "as-is" phase by modifying several aspects of the gameplay in the hope of reaching a semi-completed version of the game.

Although binaries of the v53 level editor were found in the archive, there was no source code, so creating a modern Windows port requires reverse-engineering the code. 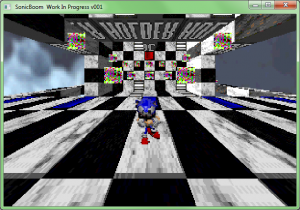 In 2016, Jollyroger discovered that the POV archive also contained binaries of build v001 on PC from 1995. This build is very early, with no controllable Sonic. You can control the camera by moving the mouse to explore the level. Although no source code was found, this build predates the transition to NV1 technology and renders entirely with software, therefore it will run on modern machines as-is. Due to the simplicity of the code, the engine runs extremely fast on modern CPUs.

Even though there was no official announcement, it became quite clear that Sonic X-treme was indeed canceled, and soon became a wildly discussed myth in fan circles, little known about what had happened to the game. It was only with the growth of the Internet and a fanbase reaching adulthood that allowed proper inquiry into what had really happened, resulting in fan contact with Mike Wallis, Chris Senn, and Christina Coffin. This outpouring of support led to the creation of the Sonic Xtreme Compendium, a site owned and operated by Chris Senn meant to organize the many resources made during the project, and chronicle the highs and lows of development.

Though no copy of Ofer Alon's engine has been released, a prototype of Christina Coffin's boss engine (early in its conversion into "Project Condor") was put up for auction on ASSEMbler Games, and though effort was made to buy it for public release, it was ultimately sold to a private collector.

The latest major release of material concerning the game was in 2009, when a package of unreleased textures and level data was leaked to the public. Coupled with a viewer, the release finally allowed fans to experience the levels that were meant to be in Chris and Ofer's Sonic X-treme, albeit in an unplayable format.

The following is a list of names the game Sonic X-treme was developed under. It must be noted that there was a second, unrelated Sonic the Hedgehog game being developed for the Sega Saturn under the name Sonic Saturn as well.