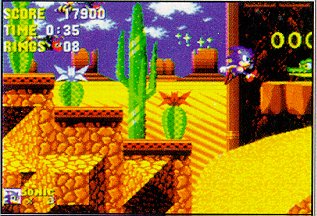 This is the only picture released by Sega showing the desert level. There's nothing to compare to, because quite obviously this level doesn't exist in either of our prototypes or in the final version.

If Sonic's off-centerness, plus wrong zone's enemies, plus the seemingly impossible trajectory for Sonic to grab the two rings don't convince you the above image is fake, the following analysis will. 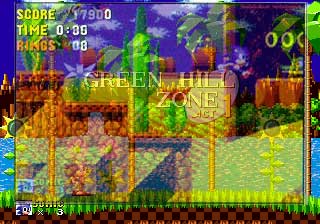 Still don't believe it's a mock-up? The zone artist confirmed it when asked about Sonic's off-centerness:

Showing doctored pictures of games in development to the press is a common and acceptable practice within the game industry.

The crocodile in the picture can be found in our prototype ROM:

Seeing that Emerald Hill buzzers do appear in this picture, it's questionable whether the crocodile was really intended for this desert level or not. Brenda Ross, artist for this zone, said the following when asked why there'd be a crocodile in a desert:

Therefore the existence of this enemy doesn't really prove there was ever a playable Dust Hill level in an earlier prototype.

Interestingly, on the drawing board, this desert zone might have featured a palette change and turned it into a winter zone.

Though for a time it was believed the connection between the name "Dust Hill Zone" and the desert level mock-up was a fan invention in the early days of the Sonic research scene that just wouldn't disappear, the link between the two was proven once and for all on September 13th, 2008. Community members Tweaker and Sik, with help from former Sega Technical Institute employee Chris Senn, were able to get in contact with one of the pivotal members of the Sonic the Hedgehog 2 team, Director and Game Planner Hirokazu Yasuhara.