It would seem like this comes from another, earlier, prototype of Sonic 2. However, this appears to be a mock-up picture. 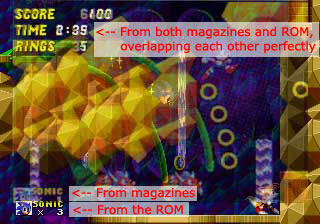 Scale the EGM picture so that the HUD is the same size as our prototype, and superimpose both images together. You'd see the life icon of EGM's is significantly displaced upwards, even though the Score/Time/Rings aligns perfectly. We know the scaling is correct, because both life icons are approximately the same size.

In other words, the screen size is not even correct. Therefore this picture is believed to be a mock-up, and not taken from a playable prototype version.

You say, unlikely for Sega to release fake screenshots to the press? Not at all unlikely. It's quite common within the gaming industry. Craig Stitt, the artist for Hidden Palace Zone, confirmed it:

There is no question about it, this screenshot (along with M03 and M04) is a mock-up.

The dinosaur enemy which appears in the picture does in fact exist within our prototype ROM image.

However, it doesn't necessary mean this enemy would be used in Hidden Palace. Buzzers did appear in a supposedly desert level in M03, even though they were intended for Emerald Hill.

The following sprite was also found within the prototype ROM:

Which was later identified as a part of the background of this picture: 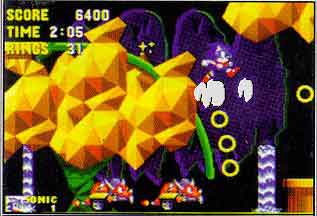 This piece of leftover data suggests that an earlier version of Hidden Palace used a different background, possibly the same one as in the above picture.