Sonic Gems Collection (ソニック ジェムズ コレクション) is a compilation of more obscure Sonic the Hedgehog video games. The compilation is a Nintendo GameCube exclusive in North America, but has also been released on PlayStation 2 in Europe and Japan. An Xbox version of the game was planned, but was later cancelled[7].

SegaSonic the Hedgehog was initially planned as a title to be included in this compilation but was left out due to problems with emulating the game's original trackball control scheme[8]. There is also an entire art section of the museum dedicated to Chaotix, which may indicate that Chaotix may have been planned for inclusion, but was left out instead. Sonic Eraser and various games from the Wonder Boy series were also considered for inclusion in the compilation[9]. 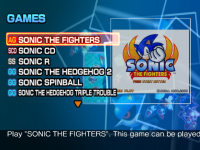 The Games menu, showing the three main games of the collection.

The collection also includes the six Sega Game Gear games that were not included in Sonic Mega Collection Plus:

All of the above games also include their original manuals in digital form. In the case of Sonic CD and Sonic R, their PC manuals are included alongside the manuals from their original systems, and in the case of Sonic the Fighters its original arcade flyers can be viewed. The manuals available are region-specific in most cases, with NTSC-J versions using the Japanese manuals and NTSC-U/PAL versions using the North American manuals.

If a game has been run for a total of three hours, "Hints" will be unlocked for that game in the Extras menu or in the pause menu, which detail cheat codes and other tips. The user does not need to actually play the games to unlock the hints, they just need to be run for the required amount of time.

The PlayStation 2 version contains both Japanese and American regional data, including different released manuals scans and alternate and differing versions of games (for example, Sonic CD has both the Japanese and American soundtracks). The game will load the data depending on the language the console is set on. The GameCube version only has the language for the region of release in the game data.

Only the Vectorman games are available outside of Japan in order to keep the ESRB's "Everyone" rating.

Games from Sonic Mega Collection Plus can be unlocked in a "demo" form by playing Sonic Gems Collection daily for a consecutive number of days. These are actually the full games, but play automatically begins at the last level or final boss with a time limit imposed on play time. If the player completes a demo with time remaining, then the remaining time can be used to continue playing from the beginning. There are cheat device codes available which will freeze the time limit, allowing the games to played through fully.

All demos are accessed via the Museum rather than the Games menu. Savestates and hints are unavailable for these demos, and resetting the demos via the pause menu will not reset the timer. 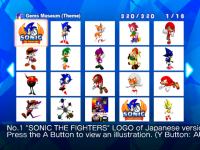 The first page of the Museum, featuring artwork from Sonic the Fighters.

Sonic Gems Collection includes a Museum, where the user can view various artwork, screenshots, videos and other content. Content in the museum is gradually unlocked as the user plays each game in the collection, though some items must be unlocked through other means. Music may also be unlocked by completing specific objectives, and unlocked music can be played by pressing

in the Museum to view the audio player.

The contents of the museum can be viewed in the link above.

When originally released in arcades in the US and Europe, it was renamed Sonic Championship. In Gems Collection, the title of Sonic the Fighters was used for every region. Model data of all unused characters was removed. Character data still exists, but upon selection, the game crashes due to missing models.

Due to the limited amount of controller slots on the PS2, Sonic R's multiplayer mode was reduced to two players from the possible four on the PC version. The GCN version preserves the four player capability from the PC version. The draw distance is greatly improved over previous versions.