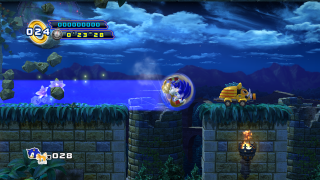 A demonstration of the Rolling Combo.

Once the player has reached a certain point in Sylvania Castle Zone Act 3, the player can press

while standing on the ground to make Sonic and Tails curl up in a yin-yang formation, then roll on ahead in a burst of speed. This is faster than a regular Spin Dash, though speed will decrease if the two bump into a wall, and the move will be stopped if they bump into a wall three times. The player can cancel the move at any time by pressing the Tag Action button again. This move is powerful enough to destroy any enemy it hits, knock down pillars and barriers, burrow through the deep snow in White Park Zone Act 1, and even take out the Snowy Badniks in one hit instead of three. It also makes the player immune to almost every environmental hazard, except for electricity and boss attacks.