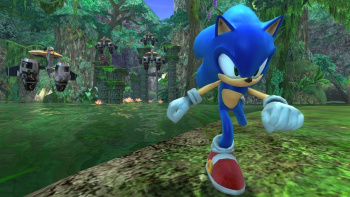 Egg Flyers are combat automatons constructed by Dr. Eggman, deployed by the mad scientist in and around Soleanna during Sonic the Hedgehog (2006).

It's similar in design to Hornets and have the ability of tracking enemy movement. The Egg Flyer is equipped with a hovering unit built into their central hull which extends to the back, twin engines below the hull that allow steering and a vulkan cannon. The Egg Flyer has a poor defence, taking one hit to the core to destroy. Groups of them can often be found hovering in formation, just asking to be used as stepping-stones in a Homing Attack barrage - for example, during the Egg-Genesis boss fight.

It has an advanced model, the Egg Buster.