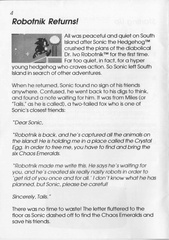 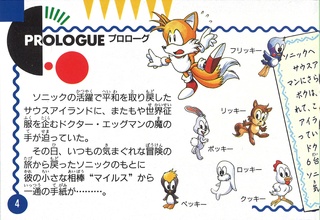 After Sonic's success in restoring peace to South Island, the evil clutches of Dr. Eggman, who is once again plotting to take over the world, are closing in.
When Sonic returned from his usual whimsical adventures, he received a letter from his little buddy Miles...

All of our friends on South Island have been kidnapped by Dr. Eggman.
I'm being held captive in a place called Crystal Egg and I'm being forced to write this letter. But apparently you can only come here if you have the six Chaos Emeralds, which are somewhere on South Island.
Dr. Eggman has built six horrible robots that are awaiting your arrival, so be careful, Sonic...

What will be the fate of Miles and his island friends?
Where are the six Chaos Emeralds?
As soon as he finished reading the letter, Sonic was off and running...

A boy who adores Sonic. His two tails are a sign of his vitality.