This page has a list of magazine articles for Sonic R.

A short preview of Sonic R in the September 1997 issue of American gaming magazine Tips & Tricks. The article is notable for two reasons: it features Resort Island set during the evening (when the Sega Saturn version did not have time-of-day changes) and its use of prototype box art. 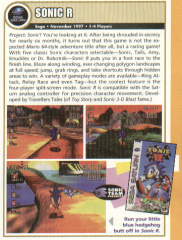 A short overview from an unknown French magazine covering the 1997 E3 showing of Sonic R. This scan is particularly notable for its prototype screenshots not seen in any other media.