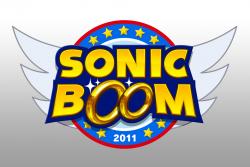 Sonic Boom is a yearly community event originally created by SEGA of America to celebrate the 20th Anniversary of Sonic the Hedgehog, set at Club Nokia in Los Angeles, California on June 6, 2011, during E3. The main attraction to the event is a public opportunity to play upcoming games before they are released, like Sonic Generations, Sonic & All-Stars Racing Transformed, and Sonic Lost World. The event also has special guests, like Iizuka Totaka, Yugi Naka, and Jun Senoue, performances by Crush 40 and Cash Cash among other activities. It is the first Sonic-themed community event in the United States hosted by Sega.