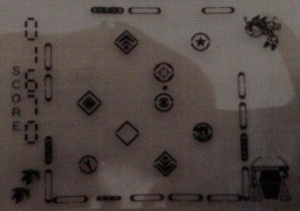 Plastic screen overlay demonstrating gameplay, though without the backdrop.

Sonic Blast is a 1994 LCD game released in the US by Tomy as part of the Pocket Arcade series. The screen comes out from the lower half of the device via a spring operated pop-up type mechanism. The design of the device is similar to the other Sonic game in the series (Amazing Sonic), including the odd button layout which separates the d-pad into two parts (one button for

movements on the right side and one button for

movements on the left hand side). There is a button in the center labelled 'Launcher'. There are also four small buttons - on the top part of the device that pops out - these are just under the screen and from left to right are labelled as follows; Sound, Zone, Pause and Turbo.

According to the back of the box the story goes:

According to the manual sheet inside the packaging, the story goes: