Sonic 3D Blast is an LCD game created by Tiger. It was available in the 3rd generation casing and also as part of the Pocket Arcade series. The game features a standard direction pad and 4 buttons, "jump", "faster", "slow roll", and "spin dash". There are additional buttons for toggling the power or sound, and starting and pausing the game. The background of the game is a rendering of the checkerboard floor found in Green Grove Zone in the 16-bit game. 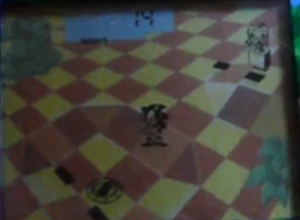 The player controls Sonic the Hedgehog, and the objective of the game is to avoid a cannon which was located in the bottom right side of the screen which frequently shoots. The indented area of the ground contained a Bee-hive like enemy with a rotating ball. The player must destroy this enemy to collect Flickies. After enough Flickies are collected, the player will face Dr. Eggman in a battle similar to the Green Grove Zone boss. Sonic can be made to move faster if the "faster" button is held. A spinning roll can be used by pressing the "slow roll" button.