Sonic 2 Retro Remix is a large-scale ROM hack of Sonic the Hedgehog 2 for the Sega Mega Drive, created by Thorn and DNXDelta. The goal of the project is to create a 2D Sonic the Hedgehog game that requires exploration to progress, as well as the requisite platforming and sheer speed. A mission system akin to those of the 3D Super Mario games is implemented as the means of progressing from one level to the next. Missions involve earning Chaos Emeralds in scavenger hunts, boss battles, speed runs and score attacks; most require learning each level's ins and outs, instead of just finding the easiest way to the goal. 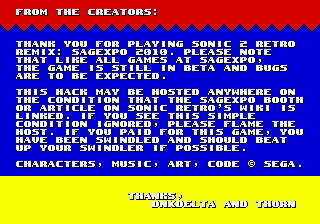 The project began after a rift in the design team of Sonic 1 Pixel Perfect led to the creation of two separate hacks. Since then, S2RR has moved beyond basic art and layout modifications into actual code editing and creation. Modern Sonic moves such as the wall kick and midair actions coupled with retro Sonic physics put the game in a league of its own. The game won several accolades in the 2009 Sonic the Hedgehog Hacking Contest and has been provided assistance by many of the Sonic hacking scene's prominent hackers. Since the Hacking Contest 2009 version, releases have been made as exhibits in both the 2010 and 2011 Sonic Amateur Games Expo events.

posted to the official thread on the Sonic Retro forums with some information on the future of Sonic 2 Retro Remix, including the news that DNXDelta may be leaving the project, prospects for future additions to the gameplay and a storyline, the offer for other members of the community to contribute to the project, and an intention to resume active development early in 2012.

Sonic is currently the only playable character (though DNXDelta would like to re-implement Miles "Tails" Prower). The player now has infinite Lives (and thus 1-Up monitors are absent): rather, suffering damage when holding no rings now simply returns Sonic to the overworld of the current Zone. The original game's life counter is replaced by one showing the number of Chaos Emeralds that have been collected.

Zones consist of an overworld area and a number of Acts, usually two or three. Barriers in the overworld prevent progression to other Zones until Sonic has collected a certain number of Chaos Emeralds, which are earned by completing each Act's various missions. Giant rings in a Zone's overworld warp Sonic into its the Acts, and present the player with descriptions of or clues to the Act's six missions, and thus how to collect its six emeralds. Three of these emeralds each require the player to find them hiding in the level or to defeat Dr. Robotnik in a boss battle. One emerald requires the player to reach the goal within a time limit. One emerald requires the player to attain a certain score (double scoring for collected and retained rings, and end-of-Act bonuses included). The final emerald is awarded for finding and opening all seven of the emerald monitors in each level.

Sonic can exit an Act to the overworld at any time, by pausing the game and pressing A. Any emeralds collected prior to exiting are retained.

This mode was added in the SAGE 2010 version, largely to appease players who desired a simpler experience than that offered by the mission-based gameplay that forms the core of the hack. Classic Mode needs little explanation; the aim is simply to clear each Act, as in the classic Sonic games. No Special Stages are available in Classic Mode, and some acts from Adventure Mode aren't in the level progression. As of 2011, the mode has been removed, and it is unclear whether it will return.

All moves from the original Sonic the Hedgehog 2 are available, occasionally with some slight alterations. The

button is no longer a jump button, and jumping out of a spin attack is now controllable. The "speed cap" behavior, which slowed you down to a manageable speed if you left the ground at high speed, has been removed. New moves include: 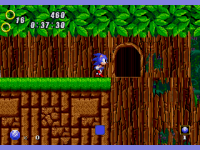 This introductory level features short acts for easy hunting. Climb branches, run through tunnels, and jump down from treetops to find emeralds, and get a feel for your radar as it reacts to nearby emeralds. Conveyors serve as a way to speed up and as a hindrance when heading the opposite direction. The level is derived from Wood Zone from Sonic 2 prototypes.

Based on Sonic 2's opening Emerald Hill Zone, this level features plenty of paths to explore and simple Badniks to destroy. The zone changes from a coastal area to a large waterfall as you progress from act to act. Ziplines, various loop designs, and brief underwater areas make speedy movement a must, but exploration is the name of the game and you'll need to look high and low for emeralds in order to progress to the next zone.

While the sheer amount of steep downhill slopes and speed boosters makes getting from start to finish a cinch, learning which of the tangled paths gets you there fastest takes some time. Act 2 contains a red chemical that can kill Sonic upon touch. Switches control the water level in the third act, and the floating platforms that move with it are key to collecting emeralds or navigating the trickier passages.

This cold modification of Hill Top Zone inexplicably houses lava sure to punish misjudged jumps. Passages on the mountain's surface tend to be straightforward, but the caves underneath are labyrinthine and susceptible to magma flows. Badniks here are well-protected, so think twice before planting a homing attack onto a shield of fire.

With architecture straight from prototype versions of the original Casino Night Zone, this zone is less a platforming challenge and more a pinball machine. Bumpers, flippers, and giant springs are activated using the

buttons. Badniks are scarce here, so score attacks are largely based on how quickly you can grab large collections of rings and bring them to the finish.

It's all upstairs from here, as the one act in this zone is twice as tall as the others so far. All of the familiar traps from the original Metropolis Zone return here, with some areas forcing you to use moves you didn't have back in 1992 just to progress. With no more locked doors between you and the finish, this zone's missions are entirely optional.

The following tools were used in the making of this game (generic text/hex/image editors, Genesis emulators, and assemblers notwithstanding):

Some of the game's music tracks were based on freely available MIDIs created by the following people from VGMusic: