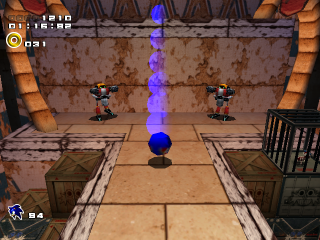 When Sonic presses the jump button or the action button (usually

) during a jump, he will curl up into a ball and crash down with great force before bouncing back up. This is useful as an attack on enemies and obstacles beneath the player and for opening Monitors and Item Boxes. In the 3D games, Bounce Attacks can often be strung together in quick succession to gain an extra bit of altitude, allowing the player to reach high areas.

The first game to feature this move is Sonic the Hedgehog 3, with the move also appearing in Sonic & Knuckles and the locked-on version, where it is named the Renzoku Bound (連続バウンド) in the Japanese manual.Media:Sonic3 MD JP manual.pdf[3] In order to perform this move, Sonic must first acquire a Water Shield and must not be in his Super/Hyper form.

When in mid-jump, the player must press

to make Sonic perform the move. If used directly on a Badnik or a Monitor, the player will achieve an even greater bounce.

in mid-air, Sonic will perform the move, and by repeatedly pressing

, the move can be done an indefinite number of times, giving the player extra altitude necessary for reaching ledges that can't be reached with a normal jump.

In the 2P Battle mode, Amy Rose can also perform the move.

By Spin Dashing toward a wall, jumping if necessary, and pressing

so that Sonic bounces off the floor just before hitting the wall, he'll carry the bounce animation into the wall and translate the horizontal speed of the Spin Dash into vertical momentum off the wall. This is nicknamed the "Super Bounce", and it allows Sonic to reach exorbitant heights, up to seven times as high as a standard bounce can provide.

in mid-jump, and a Trick Action that is performed by pressing

after launching off a Spring or gimmick. When Sonic hits the ground from using the move, he will not rebound off the ground as much as he normally would in other games. When used as a Trick Action, the move will not cancel the momentum gained from Boost Mode.

in the middle of a jump. He can also perform the move as a Trick Action like in Sonic Advance 2 if he is paired up with Tails.

In Sonic the Hedgehog 2006, the move is referred to as the Bound JumpMedia:Sonic06 360 US manual.pdf[7] (バウンドジャンプ)Media:Sonic06 ps3 jp manual.pdf[8], and also requires the Bounce Bracelet in order for Sonic to perform it. It is performed by pressing

In addition to elevating the player, the move creates an aura around Sonic that makes the move useful for attacking enemies. However, using the move makes Sonic lose all forward momentum, and does not make him immune to enemy attacks.

In the console/HD versions of Sonic Generations, Classic Sonic is capable of performing the move when he is equipped with the Aqua Shield. The rebound of the move is very floaty when compared to how the move is performed in Sonic 3, giving Classic Sonic more air time.

In Sonic Lost World, the move is referred to as the Bounce Jump, and is part of Sonic's natural moveset. In order to perform the move, the player must press

In the Wii U/PC version of the game, the player gains a little elevation when peforming the move, but it can only be used three times in succession per jump, with Sonic uncurling after the third bounce. The amount of damage this move can do to enemies is the same as an uncharged Homing Attack, and the move can only be triggered where there is no target or after hitting an enemy, making it hard to use.

In the Nintendo 3DS version, Sonic can perform this move an indefinite number of times per jump like in other games, making it more useful against enemies such as Grabbers.

In Sonic Mania, the move is called the Bounce JumpMedia:SM PC DIGITAL MANUAL UK V10 LR.pdf[1] (連続バウンド)Media:SonicMania consoles JP manual.pdf[9], and Sonic can once again perform the move with a Bubble Shield by pressing any of the jump buttons in the middle of a jump. Compared to Sonic 3, however, there is a slight delay before Sonic can perform the move again consecutively.