Back to: Sonic the Hedgehog Triple Trouble.

The following are instruction manuals for the Sega Game Gear game Sonic the Hedgehog Triple Trouble. 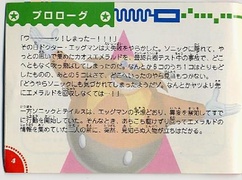 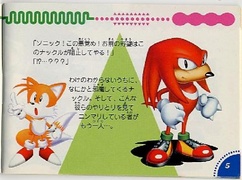 "Waaahh! Oh nooo!!!"
That day, Doctor Eggman made a huge mistake. The Chaos Emeralds that he had finally managed to collect while hiding from Sonic were blown out of nowhere in an accident while testing the final weapon. He managed to recover one of the six, but he had no idea where the other five had gone.
"It looks like Sonic has found out about this. I'll have to get the Emeralds back before he does!"

Meanwhile, Sonic and Tails, as Eggman had predicted, had already sensed something strange and had begun to take action. As they were running around gathering information on the Emeralds, they were suddenly confronted by a stranger.

Knuckle stood in their way with no sense or reason as to why. And there's one more person who's smiling as he watches them bicker...

"Heheheh! Neither Sonic nor Eggman count for squat! While they were at it, the Chaos Emeralds were obtained by me, none other than Treasure Hunter Fang the Sniper!"
It seems that this case is not as straightforward as usual.
What are you gonna do, Sonic!?
"Isn't it obvious? With some courage, I can do anything!"

As usual, the familiar supersonic duo is back with another bang! In the previous game, Sonic was the only one who could collect the Chaos Emeralds, but in this adventure, Tails has grown strong and is now of age. He's become Sonic's best friend in both name and substance.

This is the same evil genius scientist that always causes trouble that we've all come to know and love. He never gives up on his dream of world domination... or so it seems. (?) This time, he's a little disappointed because he had to fight Sonic due to his own screw-up. He plans to bring out his handmade ultimate robot, Metal Sonic, to fight him.

Also known as "Knuckle". He is an echidna with a strong sense of justice. In fact, he was tricked by Eggman into thinking that Sonic is a villain who wants to use the Chaos Emeralds to take over the world. He's short-tempered and rash, but he's pure and honest at heart. He'd be a great guy to be friends with, but...

He's a treasure hunter who lives in subspace and collects Chaos Emeralds. He's a cunning scoundrel, but he's a cheapskate. Although he tries hard to sneak around and outsmart others, he often has a mischievous streak where he falls short in the end. He's proud of his flying motorcycle... 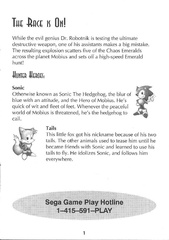 The Race is On!

While the evil genius Dr. Robotnik is testing the ultimate destructive weapon, one of his assistants makes a big mistake. The resulting explosion scatters five of the Chaos Emeralds across the planet Mobius and sets off a high-speed Emerald Hunt!

Otherwise known as Sonic The Hedgehog, the blur of blue with an attitude, and the Hero of Mobius. He's quick of wit and fleet of feet. Whenever the peaceful world of Mobius is threaten, he's the hedgehog to call.

This little fox got his nicnkame because of his two tails. The other animals used to tease him until he became friends with Sonic and learned to use his tails to fly. He idolizes Sonic, and follows him everywhere.

This bad egg is trouble incarnate, always stirring up problems for the inhabitants of Mobius with his latest twisted schemes. The Docotr has one of the Chaos Emearlads, and he thinks he knows the perfect ay to get the other five Emeralds back and keep that meddling hedgehog and his fox friend from interfering.

Knuckles the Echidna was the guardian of the Chaos Emeralds on the Floating Island. He's strong and smart. Like Sonic, he knows how to Spin Dash. He can also Power Glide through the air, and when he uses his knuckles to tunnel and climb, there's no place he can't go. Dr. Robotnik has tricked him into thinking that Sonic and Tails are out to steal the Chaos Emeralds, and Knuckles is determined to stop them.

Nack the Weasel is a treasure hunter who is after the Chaos Emeralds. Though he doesn't know the true power of the Emeralds, he thinks those big pretty jewels will score a handsome price on the market. And the easiest way to get them is to steal them from someone else. He may not be as fast as the others, but he's tricky, and he has a speedy little airbike to help get him around.