Shadow Basketball is an LCD game created for distribution at McDonald's restaurants. It was offered as a part of Happy Meals for a limited time in 2004. It was also repackaged under the name Shadow Hockey. 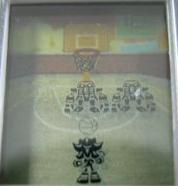 The objective of the game is to move Shadow left or right to an area where there is no defender or where a defender is in a unguarding position. When in this position, pressing the right button will score a point. After making 9 baskets, the level will advance, increasing the speed and the number of defenders. If the player's shot is blocked five times in a level, the game will end.