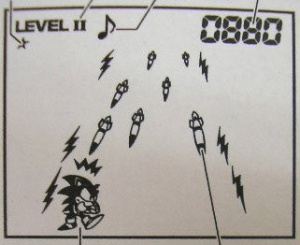 SegaSonic the Hedgehog is a 1992 LCD game which was used as a promotional item in Japan. They were found in UFO catchers. Three versions were created which only vary by the color and by what is drawn on the case. There was also a handy keychain attached to the case.

From the game screen it looks like the player needed to avoid projectiles, which seems similar in concept to Sonic Speedway. The two buttons probably controlled left and right movement. It's not known if the entire game had the player avoiding missiles, but the graphics look to be the drawn the same way as most of Tiger's games, so it's likely that the game only featured missile dodging.