The following is the manual for the Mega Drive version of Sonic the Hedgehog, including English translations when available. 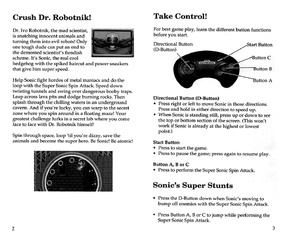 Help Sonic fight hordes of metal maniacs and do the loop with the Super Sonic Spin Attack. Speed down twisting tunnels and swing over dangerous booby traps. Leap across lava pits and dodge burning rocks. Then splash through the chilling waters in an underground cavern. And if you're lucky, you can warp to the secret zone where you spin around in a floating maze! Your greatest challenge lurks in a secret lab where you come face to face with Dr. Robotnik himself!

Spin through space, loop 'til you're dizzy, save the animals and become the super hero. Be Sonic! Be atomic!

Translation of the Japanese manual

Dr. Eggman, the evil genius scientist, has begun to embrace his evil ways again.
"Sonic... that annoying, cheeky hedgehog. He's the one who's always ruining my great plans. This time, I'm going to crush him with the power of my science! Heheheh..."

Then one day, danger came upon the island. Dr. Eggman and his henchmen landed on the island.
"Hmph... I'll make sure to get my hands on the Chaos Emeralds, even if I'll have to dig up this entire island."
Dr. Eggman built a huge fortress on the corner of the island and began to develop it.

"Eggman! You still won't learn your lesson?!"
Sonic rushed over after hearing the rumors. Dr. Eggman's harassment was a regular occurrence. He has always been dealt with so far. Dr. Eggman may think of Sonic as his nemesis, but he's no match for Sonic.

But this time, oh my... Something's not right.
"You see, Sonic?! This time it's different. I've turned all the animals on the island into robots."
"Y-You guys!"
"They'll all do what I tell them to. In other words, the whole island is your enemy. Hahahahaha... cough cough. This time, the whole world will be mine."

This is terrible! Go, Sonic the Hedgehog! Everyone is waiting for your help.