BakaSonic is a hack of Sonic the Hedgehog for the Sega Mega Drive by Bakayote. A demo of it was submitted for the 2014 Sonic Hacking Contest.

Started by Bakayote as practice for hacking, BakaSonic has been evolving since its creation, even being a prank at one point early in its development. This hack contains level art, object art, code and music modifications.

Varion Icaria later joined in as the project co-leader, and was a very big help in fixing code, importing art, creating music, and even importing a custom version of

Later, after SHC2014, Varion's position fell as co-leader, although he does still help with programming the game. The game was rebuilt from the ground up, using only art from the previous build. Flamewing's sound driver was scrapped in favor of a modifed stock Sonic 1 driver with Vladikomper's MegaPCM Driver built upon it. 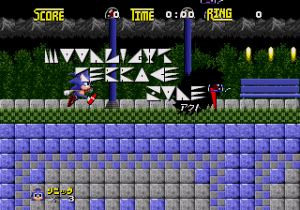 BakaSonic starts in a Zone known as Moonlight Stronghold Zone, In which you play as Sonic the Hedgehog ; who resembles early concept drawings of himself. Moonlight Stronghold contains 3 acts and a boss at the end in which JoeNick, a completely custom boss coded by Natsumi, tries to destroy Sonic in a full on brawl, using such attacks as flaying kicks and throwing Bloody Marys. After the boss fight Sonic walks off into a creepy underwater temple level known as Mystical Citadel.

This hack contains a custom soundtrack coded in SMPS by Bakayote. Most tracks being composed from scratch just for the game, and others being Japanese songs transposed by ear.

All other music tracks in the game and sound test are original compositions by Bakayote, except $97 which is a remix of the S&KC version of Ice Cap.