The following are instruction manuals for the Sega Game Gear game Sonic Labyrinth. 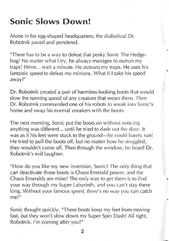 Alone in his egg-shaped headquarters, the diabolical Dr. Robotnik paced and pondered.

"There has to be a way to defeat that pesky Sonic The Hedgehog! No matter what I try, he always manages to outrun my traps! Hmm... wait a minute. He outruns my traps. He uses his fantastic speed to defeat my minions. What if I take his speed away?"

Dr. Robotnik created a pair of harmless-looking boots that would slow the running speed of any creature that wears them. Then Dr. Robotnik commanded one of his robots to sneak into Sonic's home and swap his normal sneakers with the boots.

The next morning, Sonic put on the boots without noticing anything was different... until he tried to dash out the door. It was if his feet were stuck to the ground—he could barely run! He tried to pull the boots off, but no matter how he struggled, they wouldn't come off. Then through the window, he heard Dr. Robotnik's evil laughter.

"How do you like my new invention, Sonic? The only thing that can deactivate those boots is Chaos Emerald power, and the Chaos Emeralds are mine! The only way to get them is to find your way though my Super Labyrinth, and you can't stay there long. Without your famous speed, there's now way you can catch me!"

Sonic thought quickly. "These boots keep my feet from moving fast, but they won't slow down my Super Spin Dash! All right, Robotnik. I'm coming after you!" 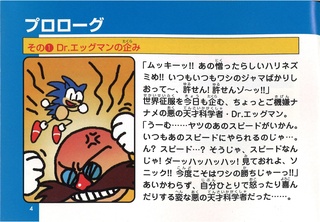 "Augh! I hate that revolting hedgehog! He's always, always getting in my way, and I won't let that slide! He won't get away with this!"
Dr. Eggman is an evil genius scientist who is in a bad mood and is planning to take over the world today.
"Hmmm... I can't stand his speed. It's always that speed that gets me.... Hmm? Speed...? Yes, it's speed! Daahahaha! Watch me, Sonic! I'm going to win this time!"
He was still the same weird evil genius scientist who acted angry and happy all by himself...

It was mid-afternoon when Sonic woke up that day. Tails had only gone out a few days ago, saying something about traveling somewhere at will.
"It's good to be alone sometimes."
With this in mind, Sonic got up and put on his favorite boots, but...
"Huh, what the?"
His legs feel heavier than usual... Sonic had a bad feeling about this, and when he took a closer look at the boots... he saw Eggman's symbol on them!
Sonic had fallen right into Eggman's evil scheme!

Chapter 4, Adventure in the Great Labyrinth

Sonic tries to run towards Dr. Eggman, but he can't run or jump because of his boots...
And then a roaring sound echoed across South Island... the construction of Eggmanland, the great labyrinthine fortress, had begun!
But Sonic will never give up!
"Even if I can't run or jump, I can still do a rolling attack! Don't think you've won just because of this!"
Sonic heads into the great labyrinth to retrieve the Chaos Emeralds.

The world's fastest sonic-speed hedgehog. This time, Dr. Eggman's evil plan has prevented him from using his prized legs. But don't worry, he's got a rolling attack! He'll be able to spin around and take out Dr. Eggman in a matter of seconds... maybe.

He is an evil genius scientist who is planning to take over the world today and tomorrow. He thinks that Sonic is his eternal rival. This time, he plans to target Sonic himself for his evil scheme. Will Dr. Eggman's plan succeed? He'll probably fail again anyway... maybe.