Sonic Jam is a game released on the short-lived Tiger Game.com exclusively in North America. It is a pseudo-compilation of three Sonic the Hedgehog games originally released for the Sega Mega Drive; Sonic the Hedgehog 2, Sonic the Hedgehog 3, and Sonic & Knuckles. Though the game shares the same name as Sonic Jam for the Sega Saturn, its content is entirely different. Its poor quality has led to poor reception from critics and fans alike, and has been cited as one of the worst Sonic games ever made.

In 2011, an official Game.com emulator was released, meaning the game is now playable on computers[2].

Sonic Jam for the Game.com does not contain entire games; each game contains only the first respective Zone consisting of four Acts each. The first Act ends with a Signpost, while most other Acts end with a boss fight. When all four Acts are completed, the game ends and the player's high score will be recorded to the Game.com's internal memory, with each game having its own high score.

There are three selectable characters; Sonic, Tails, and Knuckles, all of whom retain the Spin Attack and Spin Dash using only the

button. Sonic cannot perform the Insta-Shield, and Knuckles cannot glide or use his wall climbing ability, however Tails is still able to fly. The Spin Dash functions differently from the original games in that when charging the move, the player must hold

to hold the charge, and the move cannot be charged more than once. The only power-ups available from Item Boxes are Super Rings, Power Sneakers, Invincibility and 1-UPs (which always show Sonic's icon regardless of the player's character).

The game has a very low framerate, and as such the footage used in the Game.com commercial had been sped up[4].

Games are selectable on the main menu. After selecting a game, a character select screen appears next. 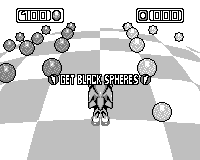 The Bonus Stage, in which the player is instructed to "Get Black Spheres".

The Bonus StageMedia:SonicJam Gamecom digital manual.pdf[5] in Sonic Jam is based on the Special Stage from Sonic the Hedgehog 3 and Sonic & Knuckles, and the method of accessing it is similar in that the player must find and enter Giant Rings hidden throughout the levels. The objective is to collect all of the black spheres while avoiding the white spheres. Like in the original Special Stages, encircling a large square of black spheres will turn the spheres into Rings, which are worth 100 points each. It is impossible to jump in these Bonus Stages, making it more difficult to avoid white spheres.

As there are no Chaos Emeralds to collect, collecting every black sphere will instead award the player with 10,000 points.