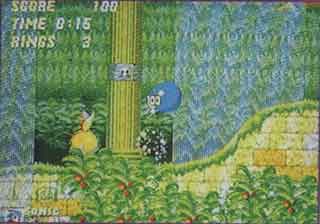 Too bad we can't see whether Sonic is using beta or final sprites. This is indeed a prototype because it came from the same source as M07 which has Hidden Palace, as evidenced by the presence of the green watermark logo above the word "Sonic".

On the same magazine page [345KB], a Chemical Plant Zone screenshot (M16) is also shown. But M16 doesn't have the green logo at the corner, so I'm less inclined to believe M16 and M18 (this) came from the same source/prototype. Although they could be.