A Recollection of events from Simon Wai 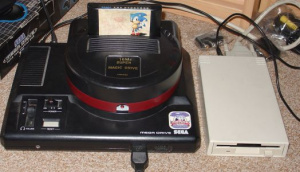 In late December 1998, on the newsgroup alt.binaries.emulators.sega, I came across a discussion about a supposedly rare version of Sonic 2 that has several playable lost levels, such as Hidden Palace Zone. I immediately remembered playing such a version of Sonic 2 in 1992 while I was in Hong Kong. I got the game from a video game store on a diskette to be played in the Super Magic Drive. The game was listed as a plain vanilla Sonic 2. Not long after I discovered it was an incomplete, barely playable version, I deleted the game from the disk. I posted a reply on the newsgroup saying I'd look for it, but gave no promise that anything would turn up.

Looking for the beta...

Since I know the ROM was widely available in Hong Kong, I figured I might have better luck if I search on Chinese ROM sites. So I fired up AltaVista and started visiting Chinese ROM sites that have Sonic 2. Within 15 minutes, as I suspected, Sonic 2 Beta was found without much hassle at http://www.geocities.com/TimesSquare/Ring/3900/ (the link no longer works now, silly). I posted the ROM to alt.binaries.emulators.sega, and notified alt.fan.sonic-hedgehog: 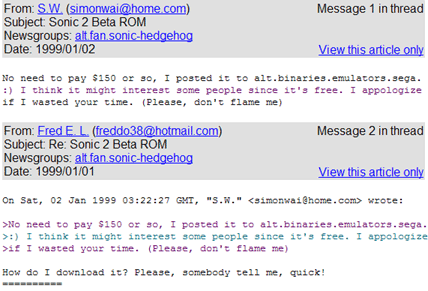 Message posted at a.f.s-h. Coincidentally, Andre Dirk, former webmaster of Secrets of Sonic the Hedgehog, was trying to auction off his Sonic 2 Beta cart for US$150.

I also emphasized, on a.b.e.s, that I was not the dumper of the ROM, and giving me credit would not be necessary, if not entirely inappropriate.

Tempest in a teapot (or "Storm in a teacup" for you Brits)...

There was a tiny bit of confusion in the emulation scene when Sonic 2 Beta was released. Apparently one emulation group saw the game on the newsgroup, and claimed the game was released by them.

The birth of this site...

In early January 1999, Simon Wai's Sonic 2 Beta Page was born, dedicated to the prototype version of this great game. The very first edition of the site had an animated gif of the title screen, and featured white text on a blue SONIC/MILES morphing background. The site has undergone several facelifts in its course of evolution. Epochs of the Sonic Secrets scene...

The discovery of Sonic 2 Beta ROM marked a significant point in the Sonic Secrets scene. Before the ROM was available, groundless speculations were made based on some poorly scanned pictures, and lots of faith was required in order for many theories to stand. After the ROM was released, investigations were made by means of "hacking" the savestates or the ROM directly. Hacking is now a foundation for new theories, which bring us another step closer to the truth of what Sonic 2 was intended to be.

Since early May 2006, drx had been dumping prototypes and unreleased games on his website, hidden-palace.org. In late October of that year, he managed to contact somebody who had a Sonic 2 prototype, and quickly raised the 1,500 USD he needed to purchase it. He was expecting a later prototype, but when he put it in his Mega Drive, he discovered that it was actually earlier than the one Simon obtained eight years before. He immediately dumped it, uploaded it to his site, and posted about it at Sonic CulT and S2Beta.

The purchase drew interest from every quarter of the community. The CulT servers (on which Sonic CulT, S2Beta, hidden-palace.org, and several other websites are/were hosted) buckled under the immense bandwidth load. People immediately started combing over the ROM image, and quickly noticed the similarity to the build shown in Nick Arcade. Some people opened the ROM in their hex editors, and discovered a piece of original, commented source code embedded within, along with what appears to be a symbol table. In short, the second prototype spurred a renaissance in Sonic research that continues to this day.

On February 23, 2008, drx uploaded a torrent of over 1000 SEGA and third party prototypes, five of which were prototypes of Sonic 2. All of them come after the Simon Wai beta and are dated (in the ROM header) September 1992, and as such, chronicle the last stages of Sonic 2's development. The prototypes differ from the final in a number of minor ways, but are still descriptive nonetheless.