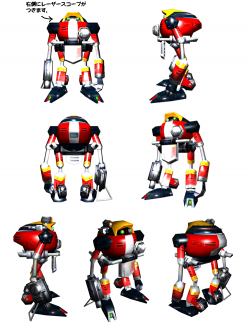 The E-100 Series are a subset of the wider E-Series of Eggman's robots. Usually being unique machines rather than mass-produced designs, the E-100 series were more humanoid, more armed, more intelligent, and in general more dangerous than their Badnik predecessors. Of the (maximum) 24 E-100 series models produced by Dr. Eggman, eight have been seen in the games and two have rebelled against their creator.

Units E-100 to E-105 were introduced in Sonic Adventure. E-101 to E-105 form the 'core' of the E-100 series, sharing the same design but with different colouration. They resemble streamlined versions of the Eggrobo badniks from Sonic & Knuckles, although the weapon functionality is now built into their metallic limbs. They are still powered by a captive animal like their 2D predecessors. The E-100 series robots have a Greek letter to append their model number; for example, E-101 is Beta and E-104 is Epsilon.

E-100 Alpha is usually referred to as "ZERO". Not sharing the design of his brothers, he is instead a bulky, green contraption and significantly less menacing than 101 to 105, the implication being that Zero is a prototype of the devices immediately succeeding him. E-100 serves as the main antagonist of Amy's story in Sonic Adventure, repeatedly chasing and kidnapping the hedgehog until she finally destroys him aboard the Egg Carrier. Curiously, despite this terminal existence failure Zero would reappear in Sonic Advance 2, as a guard robot in the Special Stage.

E-101 Beta to E-105 Zeta are tasked with various missions by Eggman throughout Sonic Adventure. Over the course of the game, E-102 Gamma obtains free will and reneges against his master's programming, hunting down his brothers to "set them free" through the dubious liberty of bullet-ridden fratricide. Gamma completes his task but is destroyed in the process, apparently without Eggman ever finding out about his betrayal.

Sonic Adventure 2 saw scarcely a mention of the E-100 series, with the exception of the mass-produced E-1000 series garrisoning Eggman's headquarters. In Sonic Heroes, we are introduced to their final member - E-123 Omega. By this point the line has been decommissioned and Omega left to rot in storage; a state of affairs which has engendered in him some bitterness by the time Rouge inadvertently reactivates the robot. E-123 is determined to destroy his creator's other machines and eventually the fat man himself, in a decidedly wrathful approach to his parental abandonment issues. With Rouge and Shadow he forms part of Team Dark. Omega's power source is unknown; he may or may not have an animal inside, like the Sonic Adventure versions.

In Sonic Battle, Eggman introduces the heroes to the E-121 Phi line. These robots are not unique, nor is their design even Eggman's own; the scientist based these robots on ancient Gizoid technology. The E-121 units prove a persistent nuisance throughout the game, as their move-copying abilities make them adaptable opponents. These robots were powered by Chaos Emerald shards.

Although the line has been decommissioned since before Sonic Heroes, the E-100's humanoid design paved the way for the legions of android models that would follow.