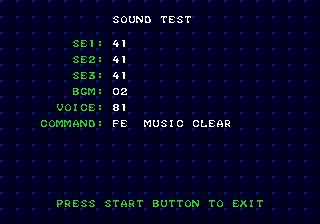 If playing the game on a Japanese Mega Drive via patch code or a region switch hardware mod, a sound test will be available in the Options screen. The Game Genie code ADTT-AAAE will also make it appear but will trigger a checksum error if it is enabled before the Sega logo screen.[1] 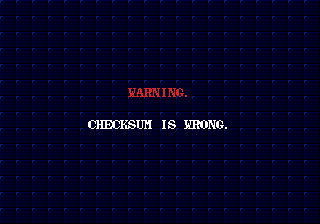 This game has the same checksum error screen from Puyo Puyo, and is triggered the same way. It is displayed at startup if the ROM's checksum fails.[1] When playing on an incorrect region system, the lockout screen can be bypassed by pressing

on Controller 2. This code can only be attempted once; if a mistake is made, the system must be reset in order to try again.[2]

Expectedly, there are multiple leftover graphical elements of the original Puyo Puyo game inside the game's memory (note: the sprite's original palettes from Puyo Puyo are used since the modified game does not feature matching ones):

There are a few unused songs and sound effects (mostly leftover from Puyo Puyo) and can be heard in the sound test.[1] 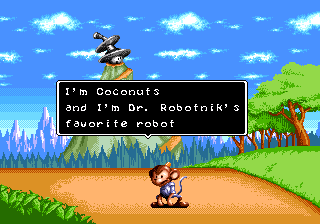 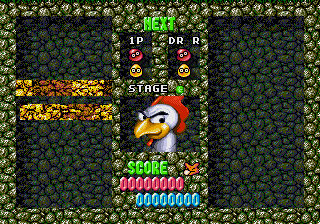 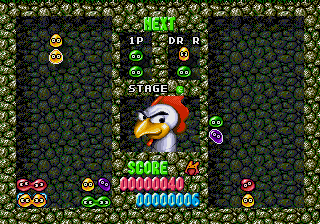 The Lesson stages from Puyo Puyo were not cut from the game and can be accessed by using PAR code 00BEFE:000? (? can be changed to 0-2). The tutorial text is glitchy and no music plays. Coconuts stands in strange positions in the stage cutscenes. Defeating the third Lesson stage advances the player to the ending cutscene.[1]