Dude's personal Sonic Adventure project, it endeavors to be the most complete and large-scale modification of the game. The main focus is on new levels using similar themes to the original levels occupying each slot, although recently the game's projected design has started to shift away from the constraints of the original level's themes due to Dude and MainMemory's constant progress reverse-engineering the parent program.

The level design in Sonic RDX is currently the most advanced hacking done to Sonic Adventure. For the current levels, the process started by using a modified SADXMDL ripper (originally written by SANiK) to read landtable and col data from sonic.exe and convert the level's model data into a more usable form, which is then imported into 3d studio MAX. Elements of the level are re-arranged and re-sculpted to create a mostly new action stage. On some occasions, raw level data is ported between levels (For example, Red Mountain has level geometry from Windy Valley ported and adapted for use outside of it's original space). The SET file is created using both reference coordinates from 3ds MAX in combination with hex workshop, or alternately with SETedit 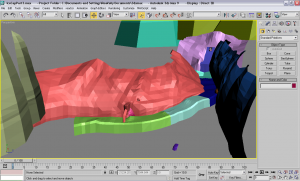 An early screenshot of Ice Cap being edited in 3ds MAX.

Future levels in RDX will be made using a slightly more advanced process. The levels using this process start off in the concept stage, where they get drawn on paper first. Then, using a few reference scales as a guide (sonic is 10 units tall, can jump 40, etc.) the first version of the level is constructed from a blank file in 3d studio MAX. Then after the entire level is constructed, lights are set up in the scene and the lighting info is baked into the Vertex Color channel. After the main mesh is done, the level is then UV mapped and textured. After the level is completed in the editing program, the original level in sonic.exe is 'deleted' by using 'Clear Level' in SADXLVL. The scene is then run through Dude's Nodetable exporter, which exports each node in the scene to a separate OBJ file, and translation information on each node into a seperate "nodetable.txt", which is imported into SADXLVL. After this, the CAM and SET files are generated using Hex Workshop and SADXLVL respectively. 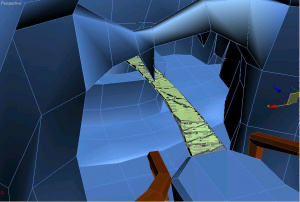 A preview of the Ice Cap revision, before being exported using the Compiled Mesh Exporter 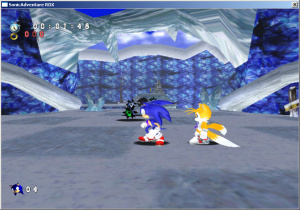 The same level, after export

Sonic RDX has been directly, or indirectly responsible for several advances in sadx hacking, including:

Generally, each new RDX release comes out randomly, with major updates available just in time for the Annual Hacking Contest. The current release coincided with the 2009 Hacking Contest, and the next (planned) release is on the date of the 2010 contest. Due to the inherently large filesizes involved with a large-scale SADX hack, downloads are currently only available at the X-Hax site.

The most recent release is the Hacking Contest 2010 build. Sonic RDX Homepage