SonicIRC is a defunct IRC network created by Qjimbo on July 29 2007. It was formerly the network for The Glowing Bridge, however, it was split off when Scarred Sun opened a new message board on Sonic Retro. Qjimbo was worried that the new board would kill GB, therefore SonicIRC was created. The network faded into obscurity in 2008 due to inactivity and server moves that broke the site.

When Sonic IRC was created there was a need to be unique from the rest of the group and to try to keep "elitism" to a minimum. Because of this voice recommended that Sonic IRC not use the IRCD of choice that the others use, UnrealIRCD, but instead use NefariousIRCu which is a fork of Undernet's IRCD, IRCu. Some people noticed the change right from the start, the lack of channel modes was a big give away, at least for those who don't check their IRC client's status window when they log in. Along with the change in IRCD choice voice recommended the use of X3 over Anope IRC Services (there is a port of Anope for NefariousIRCu). voice explains... 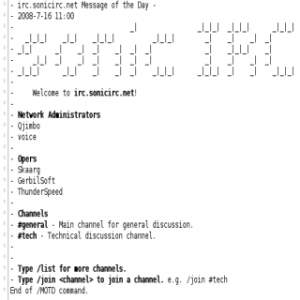