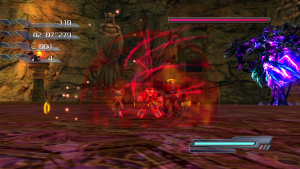 Chaos Boost, also known as Dark Shadow, is a special ability used by Shadow the Hedgehog, and it is similar to his Chaos Control ability. Shadow glows a bright red and has enhanced abilities. The ability is most like super transformation except it is much more temporary, and can be used during it. In its debut game, Chaos Boost granted true invincibility and unlimited ammo. If Chaos Boost is used while Shadow is in a Super State, he will be invulnerable.

In Shadow the Hedgehog, players can use Chaos Boost by simply destroying enough targets to fill up the "Dark Gauge". Dark targets are usually agents of G.U.N. and pieces of scenery that would normally be protected. In certain missions, Dr. Eggman's robots can also be dark targets. Once the gauge is filled, Shadow will immediately glow red, proclaim death to all opponents, and be able to use Chaos Blast.

Unlike the previous game, Chaos Boost does not grant invincibility. It does however upgrade Shadow's "Chaos Spear" and "Chaos Attack" into "Chaos Lance" and "Chaos Snap". In addition, Super Shadow is shown to continuously be in Chaos Boost mode.

Shadow is shown to use Chaos Boost in the American Sonic the Hedgehog comic series. Shadow simply needs to remove his inhibitor rings to activate the move. He then uses his many Chaos Attacks from the games, including Chaos Blast.