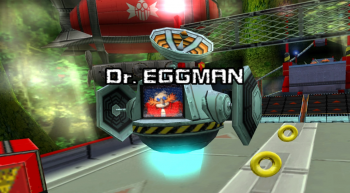 Eggman's Drone is one of the mission-assigning companion characters from Shadow the Hedgehog, conveying the orders of Doctor Eggman to Shadow (since, unlike the rest of the characters, Eggman is hardly spry enough to tag along on Shadow's adventures personally). The floating pod sports gyrating telecommmunication dishes and a central TV screen of The Doctor himself.

Eggman is the only character in Shadow the Hedgehog to assign both Dark and Hero missions (though the Fat Man's 'good' is only by comparison to Black Doom's 'bad'). As such, the floating drone features in:

Eggman's Drone does not completly replace his corpulent presence in the game; the obese scientist wades in personally with two boss machines, the Egg Breaker and Egg Dealer.