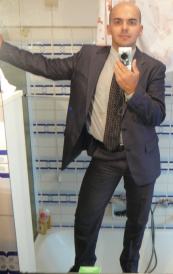 nineko is a Tech Member (former Moderator) on the Sonic Retro forums. He has knowledge of tracker music formats such as XM and MOD, as well as the SMPS format used in Sonic games. He wrote music conversion programs xm2smps and xm3smps, a special stage editor Blue Balls, and also worked on a hack, soniNeko.

In February 2008, he was banned from Sonic Retro by his request. Although he asked to be unbanned in late March, he said that he would only post in his topic where he and Wiz were researching the Cube/Iwadare sound driver, used in Dr. Robotnik's Mean Bean Machine, Snow Bros, and various other games.

He said he was leaving the forum again because he felt it began to go downhill after Scarred Sun became part of the administration and he couldn't stand it anymore, but he decided to stay on. Shortly after that, however, he had a conflict with the administration over the use of certain cart scans of his on the wiki, which culminated in him leaking a private beta of Sonic Megamix, resulting in him getting banned from the forum again, and g-lined from the irc. He returned shortly afterwards, only to be banned again after another conflict with Tweaker, although he has since been unbanned again and reinstated as a Tech Member. In June 2009, he became a Wiki Sysop again. On November 30, 2009 he was granted the rank of Forum moderator. He was banned again on the 8th of April 2010, just to come back as a Tech Member on May 17th 2010.