Sonic Bash is a hack of Sonic the Hedgehog for the Sega Mega Drive by redhotsonic.

Introducing Sonic Bash! The brand new, competitive multiplayer hack in town! Beat the living daylights out of Dr Eggman in 10 zones ranging from Sonic 1 and 2. 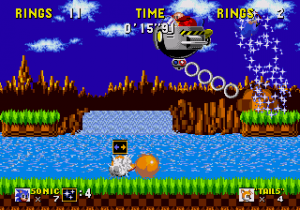 The idea of this game is that you and another friend of yours select a character (one being Sonic and the other being Tails) and you both battle it out to try to gain as many hits on Eggman. The catch is that Eggman only gets destroyed when the timer runs down to 0 (unless it's a draw at that time, then, it will wait for another hit). The player with the most hits at the end of the timer wins! You can also win if the other player dies before the timer runs out (if respawn mode is off). The amount of wins is tallied up on the results screen where you can either retry or change settings.

Currently nothing to be added 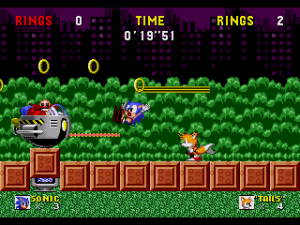 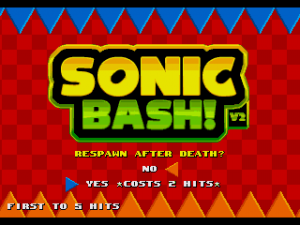 How to use netplay on Kega Fusion/Gens

So it seems a fair few people do not know how to use netplay on Gens or Kega Fusion. Here's a very quick tutorial for both (I highly recommend Kega Fusion. After its initial set-up (host only), it's a lot easier and less laggy due to the available settings. With Gens, there are no settings and takes a lot of experimenting to get the right server).

The closer you both live together, the smoother the game (means lower ping). If RedHotSonic (UK) plays Clownacy (UK), Their game should be quite smooth. If RedHotSonic (UK), plays, for example, ShadowFire (AUS), then they're going to struggle. Enjoy Sonic Bash! v2 online!