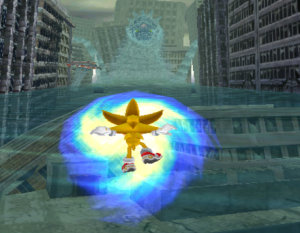 The Bolt Attack is an attack Super Sonic performs against Perfect Chaos in the final boss of Sonic Adventure.

The attack isn't activated by button-pressing as such, but is an automatic consequence of Super Sonic reaching maximum speed. A blue aura appears around Super Sonic and he moves very fast, becoming very uncontrollable. He needs to ram straight into Perfect Chaos six times when in this state to completely destroy him.

It could be said that Super Sonic's dash attack used in later games evolved from the Bolt Attack. Instead of having to go a set speed, a button activates a short attack blast which causes a similar effect as the Bolt Attack. The Sonic Boost attack is also similar, which Sonic used to defeat Perfect Chaos again without being Super in Sonic Generations.