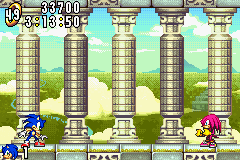 Mecha Knuckles is the fifth boss in Sonic Advance, which takes place in Angel Island Zone. It's a pink echidna robot with yellow gloves build by eggman, based on Knuckles the Echidna's appearance that uses all of his abilities, and it will also block spindash and special attacks when in his regular position. Do not attack it when he is gliding or spindashing. After it takes four hits (or three if easy mode), it will turn more aggressive, and it'll start to shoot missiles out of his mouth. The player must inflict a total of eight hits on this robot to defeat it (or six hits if in easy mode).