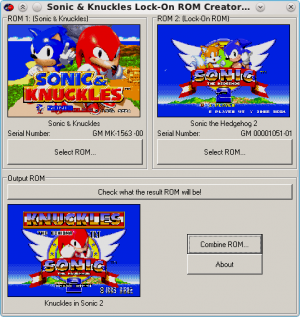 The first utility in the SHWP series isn't actually part of the series. It's a simple Sonic & Knuckles Lock-On ROM Creator. It does the job, but is very slow due to poor coding techniques. Two versions of this program have been created, the latter with a faster combiner (but still not as fast as combining with a utility such as `cat`).

The Lock-On ROM Creator has some useful features, such as the addition of the 256k UPMEM for Knuckles in Sonic 2 and ROM "cleaning" for Sonic 3 & Knuckles. Some versions of the Sonic & Knuckles ROM had a few bad bytes, causing lock-on to fail. The cleaning function fixes these bad bytes, so lock-on would work properly.

Sonic HackingWiz Pro was initially nothing more than a rename of the Sonic & Knuckles Lock-On ROM Creator, but it eventually grew to have many different features. Note that since SHWP and related programs was created before disassemblies were common, it only works on original ROMs. That is, it uses hardcoded addresses for various functionality rather than being able to edit data at any portion of the ROM or disassembly.