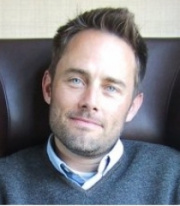 Martin Burke is an actor and voice actor born on 12 February 1968 in Dublin, Ireland.

He voiced Sonic the Hedgehog in the English-language release of the Sonic OVA, and Sumida in Dai-Guard, while he has also had acting roles in underground films like Lethal Force and Blood Chase.

He lived in Dublin until June 2006, and now lives in Kerry, western Ireland.