<forumuser ID="6029" />Here is Uncle Otis's self-aggrandizing Scener page. You are about to learn more about him than you probably ever hoped to know. 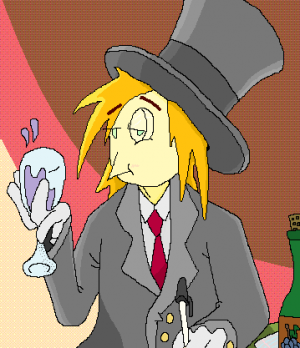 Uncle Otis in real life. He enjoys sipping discount '08 purple drank, completing USA Today Word Jumbles, and generally making a fool out of his sorry self.

Uncle Otis has been a fan of the Sonic franchise since about 1996, when he got a Sega Genesis for his birthday along with copies of Sonic 1 and Sonic 2. He was enjoying himself thoroughly, until he got to Chemical Plant Act 2, when he lost all his lives by drowning. Disgusted, he shelved Sonic 2 for months. When he picked it up again he was able to progress to the Final Boss, where he lost all of his lives. Disgusted, he shelved Sonic 2 for months. To this day Uncle Otis's least favorite of the classic games is Sonic 2.

Meanwhile, Uncle Otis's progress of Sonics 1, 3, and Knuckles was clipping along at a much more satisfactory rate (with the exception of about an hour struggling to decode the behavior of the impenetrable Carnival Night barrels). Uncle Otis was also at this time discovering the larger Sonic Scene on the worldwide web, starting with the decrepit Sonic HQ and the semi-decrepit Green Hill Zone, both still in their primes. Years later, Uncle Otis would take the rather unorthodox step of registering at the Green Hill Zone forums as Wombatwarlord777, his first step into the Sonic community. He later impersonated a fellow board member and was permanently banned.

As the years rolled on, Uncle Otis whiled away his precious vitality continuing to play Sonic games. There were good times (Adventure, Adventure 2, Heroes, Advance 1, Advance 2) and there were not-so-good times (Shuffle, Shadow the Hedgehog, Advance 3, Sonic Chronicles, ect.) Shortly before his mandatory departure from the Green Hill Zone, Uncle Otis set up an account at the Sonic Robo Blast 2 forums, again as Wombatwarlord777, where he continued his unpleasant ways. During his very first day, he submitted a horridly-rendered image of a wombat holding a machine gun as his personal picture, claiming that he was an actual anthropomorphic wombat residing in the Helmand Valley of Afghanistan. For this he was handed an infraction prohibiting him from posting pictures.

Since then, Uncle Otis has continued his merry, vulgar dance of hubris at the Sonic Robo Blast 2 forums. Among other things...

...He has created a thread solely for the purposes of analyzing the behaviors and proposing theory concerning the archaic video game villain Evil Otto.

...Declared April 1st to be This Holy Day of Sonicology, a cult where unsuspecting victims are blindfolded, spun around ten times, pummeled with several large Sonic plushies, and have their wallets pilfered while unconscious. Uncle Otis left the church after he realized that being a welfare junkie was a much more profitable line of work.

...Used his user-page on the Sonic Robo Blast 2 Wiki as a pulpit from which to deliver his trolling shenanigans. He claimed that he was King of the Trilobites, invented smoke signals, and built a shrine dedicated to Sonic which he disguised from his neighbors as a shrine to Allah. This page was later deleted.

Amazingly, Uncle Otis hasn't yet been banned from the Sonic Robo Blast 2 and is still active to this day, testing the patience of administrators and fellow users with his pathetic ploys of attention. Ironically, Uncle Otis lacks the technical expertise to create maps, program .socs, or sprite characters for the good of the site.

So Uncle Otis continued dabbling in cyberspace and eventually bumped into Sonic Retro. He modified a few pages in his particularly convoluted and verbose style, and decided that he would like to create pages for the sake of being redundant and over-documenting a declining childrens' video game series. He applied for trial membership as Wombatwarlord777, forgot his password, re-registered as Wombatwarlord7X3, and sunk into the briny abyss of the Member Validation forums. Months later, in March 2010, Wombatwarlord7X3 started another validation topic, reiterating his promise to change his name to "Wombat" or "Uncle Otis". This got the administrators' attention, and soon afterward the re-christened Uncle Otis became a card-carrying member of Sonic Retro. This is the loftiest achievement in Uncle Otis's life. The very first page on the wiki he created was this very scener page.

Why Uncle Oti- Oh god, don't you have better things to do than to read this bilge?

So why is Uncle Otis called Uncle Otis? Good question.

The name "Uncle Otis" was selected because it's supposed to remind you of your creepy, single, middle-aged uncle who comes over only for Thanksgiving or Christmas and whom you can't wait to leave because he smells and always comments on how much you've grown and asks if you've had any dates recently and if you could describe them in detail please. It's all a part of Uncle Otis's plan to drive the Sonic community psychotic and destroy it from within, which gives him unparalleled satisfaction ever since everyone's complained about Sonic's eyes being green.

Related Links You Will Not Enjoy

Did you want to see that dreadful wombat picture you read about earlier? No? Well, here it is. I forgot to mention that Uncle Otis also has a deviantART account, like all other losers on the internet.

Here's a link to that Evil Otto thread. Uncle Otis thinks it's a hoot. Sadly, it is not.