Super Mario Maker is a 2D create-your-own Mario game for the Wii U, based on four different games from the Super Mario series' past. It was released in September 2015, being released around the time of the series 30th anniversary, with a 3DS port being released in December 2016.

For the first time in the series history, Mario Maker puts you in charge of creating 2D courses to challenge players around the world. The gameplay and level themes are all based on prior 2D Mario titles, these titles being Super Mario Bros., Super Mario Bros. 3, Super Mario World, and New Super Mario Bros. U. Players can choose which of the four games to use as the theme for the level, and from there can choose from a multitude of enemies, items, and level tropes that correspond with that game's respective theme (i.e., using Yoshi only in the World and U styles), as well as new mechanics exclusive to Mario Maker. Once you've created the level, you're given the task of beating it for yourself. After you've conquered your own creation, you're then able to upload it to the game's servers and allow other players to either search for it or to come across it randomly within the 100 Mario Challenge, which pits you against a certain amount of courses based on difficulty with only 100 Marios to spare. 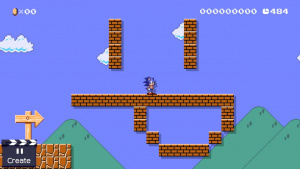 Introduced in this game, Mario has the ability to dress up as other characters. Using the Costume Mario feature, Mario's sprite can change into either one of his friends, like Peach or Captain Toad, or into other characters entirely, like Link from The Legend of Zelda or Kitty White from Hello Kitty. To use them, you must select the Mystery Mushroom item that can only be spawned in the Super Mario Bros. mode. You then go into a menu and select the costume that Mario will transform into when he touches it. The costumes you can choose from are either unlocked after beating a set of player-made courses at random, or by using the character's amiibo. In Sonic's case, using the Sonic amiibo from the Super Smash Bros. lineup will give you immediate access to his variant. Much like the Super Mushroom powerup, it allows Mario to take an extra hit, at the expense of losing the suit. Other than that, they don't offer Mario any other powerup abilities. However, they can change Mario's sound effects. For example, Sonic's jumping sound effect from the classic titles is used as opposed to Mario's, and both the Game Over and Act Clear jingles from Sonic the Hedgehog 3 replace the respective SMB1 themes.

Super Mario Maker for Nintendo 3DS was released a year after the original, however the Costume Mario feature was cut, meaning the Sonic costume was left behind.