Originally starting as a joke between himself and Qjimbo, later on becoming a joke hack as an idea for April Fools, with the addition of OmoChao it became a challenge-based (and playable) hack, where the objective is to collect, destroy or even touch as little as possible.

In this ROM hack, the first thing you will notice is that floating behind Sonic, everywhere he goes, is OmoChao. He is there, by his own definition, to help guide you through the game. However, this is not strictly what happens.

OmoChao is there to be more of an annoyance than anything else, as whenever he wishes to say a message the entire game will pause itself until he is finished. This message is also accompanied by a jingle that gets longer, and longer, and longer every time a new message comes up.

Therefore, the only way to truely avoid OmoChao's messages, the jingles, and the waiting around, is to avoid as much of everything as you can!

Can you avoid making OmoChao speak at all? 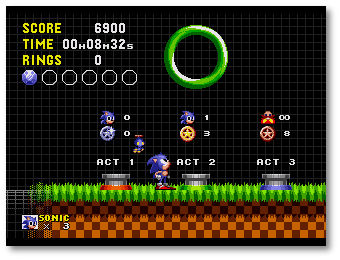 Like the hack Sonic the Hedgehog 1 @ SAGE 2010, the game starts you off on an Overworld with buttons to access each and every level in the game. The difference this time, however, is that there are only the levels available and nothing else.

Starting off, to the right you will encounter Green Hill Zone's mini-hub area, following on to Marble Zone, Spring Yard Zone, and the rest of the game's level sequentially, up until the individual mini-hub area for Final Zone.

The HUD on the Overworld shows the player's Global Score, Global Time and Global Ring Count. While these are not important yet, plans for the future will use this information. Chaos Emerald collection status is also shown just below this information.

Beyond this will appear to be nothing, but after each and every level has been played once (and infinity is not each level's Player Score) a Giant Ring will appear at the end. Jumping into this will lead to the Credits and Final Status Screen.

If you are in a level and wish to return to the Overworld without completing it, pause the game and press the

What makes this hack more than just a joke hack is its challenge-based nature, and as such a ranking system. Each and every level has both a Player Score and a Rank, ranging from

Perfect. At the end of each level, the Player Score is the number of messages OmoChao has said to you. The Rank is determined based on its Par Message Score, which will be explained below.

Every level has been played through meticulously to work out the very minimum number of messages that have to be brought up. This is known as the level's Par Message Score, and is used to determine the Rank of the player.

Green Hill Zone Act 1 has a Par Message Score of 0.

On the Overworld, above the button for each level, is a sign that will tell you both your currently saved Player Score for the level, and both an emblem and the lowest score for the Rank you have achieved. To work out the score required for the next Rank, use the above information.

No Rank is indicated by a Dr. Eggman emblem, and will show the score required for a

Similarly, at the end of each level there is a sign that will tell you your Player Score for the level you have just played through, as well as the emblem and lowest score for the Rank you have achieved.

No Rank is indicated by your Player Score having a red background, and again the

Bronze Rank score will be shown.

If you manage to get a

Bronze Rank or better, you will be given a coloured Protective Shield based on your Rank. This Protective Shield will make OmoChao flash, and will prevent him from saying any messages while it is intact. While at the end of a normal level this may seem pointless, you will also recieve a Protective Shield based on your rank before a Boss Fight. This will allow you to damage and defeat the boss without getting hit, and as such keep your Player Score where it is during the battle. Be warned, however, that apart from protecting from OmoChao's messages it is just like a regular shield, and one hit will break it, once again enabling OmoChao's messages.

As well as recieving the Protective Shield, Ranking will make the Giant Ring appear at the end of the level, allowing you access to the Special Stages. You will take the Protective Shield in with you, preventing OmoChao from giving you messages. However, upon contact with the Chaos Emerald or a GOAL Sign, it will break.

Returning to the Overworld after a level without going to the Special Stage will also result in the loss of the Protective Shield.

In certain levels, you may encounter areas where OmoChao will not be able to tell you messages, and you will be given a Temporary Shield upon entering these. Again, they will break after one hit, so be careful. Once you reach the end of the area, the Temporary Shield will be removed automatically. These areas are shown by a floating OmoChao sign by its entrance.

With Final Zone, Ranking works slightly different, and is based on the Ranks of all the previous levels.

If you do not recieve any messages from OmoChao in Final Zone, your Rank will be the lowest rank achieved of all previous levels. This includes

No Rank. If you recieve a message from OmoChao, you will still recieve

No Rank regardless of previous levels. 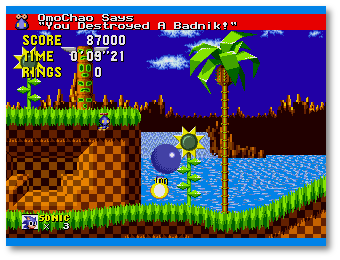 OmoChao will message you about a number of things, but not absolutely everything. Below a list of everything you want to try and avoid if you want to get as few messages from OmoChao as possible.

Losing a life will not reset OmoChao's message jingle length. Only by completing (or otherwise exiting) the level will this happen.

(There is a hidden message from OmoChao after 100 messages have appeared.)

About that hidden message

<mediaplayer>https://youtubemp4s.com/downloads/de/3f/Hidden_Message_Red_Omochao_In_Sonic_1_Omochao_Edition.mp4?h=Br6cArEaot__zuSsNgt8ug&e=1409457915</mediaplayer> Here is video proof of the "Hidden Message" that was spoken about earlier and how to make it easier to trigger it

You should enter Marble Zone Act 1 for quickness reasons

Once you have played every level at least once, a Giant Ring will appear at the end of the Overworld, allowing you access to the Credits. Once these have all rolled through, you will see the Final Status Screen with Dr. Eggman on it.

If you have missed any Chaos Emeralds, he will be juggling the ones you are missing.

If you have any level Ranks other than

Perfect, he will be juggling the ones you need for a Perfect Score throughout the game.

Future plans for this hack include adding additional levels to the game, as well as implementing Retro Channel into it, allowing players to share their results. A soon to be added feature is with SonMP3, to give OmoChao a voice, as noted in the Credits.

Introduction to the Game and the Basic Premise